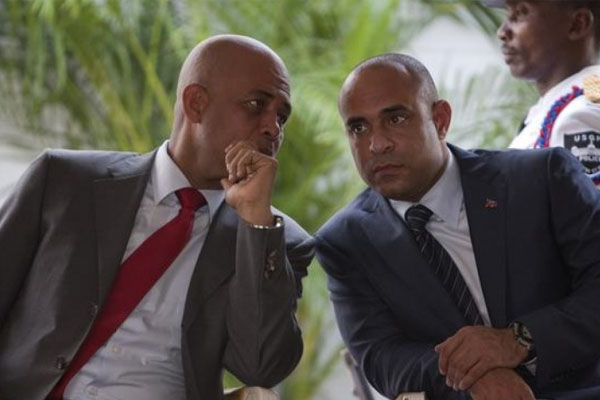 New York, USA (HCNN) — Former US president Bill Clinton said on Wednesday that the current Haitian government is the most decisive he has ever worked with in Haiti, and acknowledged that the Caribbean country’s leadership has come a long way in a short time, while suggesting that Haiti was today stronger than ever.

Clinton saluted the willingness by the government of President Michel Martelly and of Prime Minister Laurent Lamothe to make decisions that ease the task for those who want to help the Haitian people.

“He (Lamothe) leads the most decisive government I’ve ever worked with in Haiti, over more issues,” Clinton said in a speech during a special session on Haiti, on Wednesday, at the Clinton Global Initiative (CGI) annual meeting in New York.

Clinton, who has dealt with several Haitian governments in the past, said he was “personally extremely grateful for the range of interests that the prime minister and his government have shown; their willingness to actually make a decision that will permit other people to help Haitians and to help the country.”

The former US president, who remains very popular in the US and around the world, acknowledged the challenges Haiti is still facing, but highlighted progress made in the Caribbean country, which was devastated by a deadly earthquake nearly five years ago.

“It’s not a place without problems but neither is America. There is no such thing as a free ride anywhere,” said Clinton, explaining that current Haitian authorities have made significant efforts in a short time to advance the cause of the Haitian people.

“They are incredibly gifted people and they have come a long way in a short time,” he stated.

“I believe we are stronger than ever,” said Clinton, talking about Haiti and its leadership.

Clinton said he always thought that, if Haiti could get the right sort of government and the right type of infrastructure investments and could diversify the economy, the country “could escape the chains of its past.”

Lamothe, who spoke to journalists after the special session on Haiti, thanked Clinton for the comments about the willingness of Haitian authorities to make decisions on issues affecting the country.

“President Clinton says in terms of decision-making, in terms of progress, in terms of our determination to advance the cause of the country against the odds, he has worked with us and he acknowledged that the president and myself made decisions that serve the interests of the country,” Lamothe told reporters. “And I thank him for the comments.”

However, Lamothe recognized that even with the good will on the part of Martelly and himself, the two won’t be able to pick up the challenge alone.

“The task requires a collective effort. We should join our hands together to move the country’s agenda forward,” added Lamothe, acknowledging that people are becoming aware of progress made in the country.

“And every step forward means progress for the population,” he concluded.

Martelly and Lamothe are in New York to take part in the UN General Assembly and other international meetings, such as the CGI summit. Martelly will address the UN general assembly on Friday.