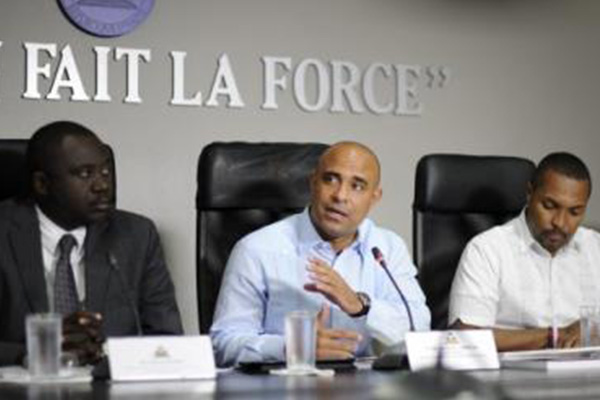 PORT-AU-PRINCE, Haiti (HCNN) — Haiti’s Prime Minister Laurent Lamothe said at the weekend that, under the leadership of President Michel Martelly, his government has made tangible progress in the areas of reconstruction, agriculture, security, macroeconomic management, investment, tourism infrastructure and the fight against corruption and extreme poverty, among many other areas of improvement, four years after the earthquake that killed hundreds of thousands of people in the Caribbean country.

Citing a report by the International Organization for Migration (IOM), Lamothe said that out of the 1.5 million people who were living in tents, 1.353 million, representing 90% of the displaced, have been relocated to safer homes, and that efforts were underway to facilitate the relocation of the remaining 147,000.

“We could have done more, but the means are lacking,” Lamothe said in a televised speech live from his office at the weekend.

“This government is working day and night to try to meet the demands of the people and we will continue to fight for the people,” Lamothe assured.

The international community has pledged more than $10 billion to finance the reconstruction of a country devastated by the January 12 earthquake, which left up to 300,000 people killed and 1.5 million homeless who had to take refuge in makeshift tents on public squares and other open spaces.

The promised funds, for the most part, have not been provided and the amounts disbursed are channeled through NGOs, which often do not take into account the priorities of the Haitian government. Only about 2% of such funds were actually transferred to the government to address the major challenges of the aftermath of the disaster.

Lamothe, who was giving a report of his government’s achievements over the past year, informed that 800 projects were ongoing and significant activities were carried out in poor neighbourhoods, including Jalousie, in the district of Petion-ville, where 3,500 homes have been renovated, kilometers of roads built, and where many other job-generated infrastructure, sanitation and social projects, were implemented.

Similar projects in many other poor neighbourhoods of the metropolitan area of Port -au- Prince, will help restore thousands of other homes, set up vocational training structures and empower communities and vulnerable families, who benefit from the social assistance program, called “EDE PEP.”

“The EDE PEP program has already reached two million vulnerable people and we will continue to bring this solidarity to the most vulnerable, while we are working to create more sustainable jobs for the population,” said Lamothe.

Lamothe said that the country has a deficit of more than 400,000 housing units. He said that the government, together with the unit in charge of construction of housing and public buildings, has set up a plan to reduce gradually the deficit as the means become available. Moreover, a project comprising some 3,000 housing units was recently inaugurated by Martelly.

In the security area, the prime minister welcomed the progress made at the level of the Haitian National Police (HNP) and cited the latest report from a UN agency that indicates that the rate of violent crimes dropped by 34%, while the rate of kidnapping has decreased by 55 %.

Lamothe drew attention to the increased size of the HNP that exceeds 11,000 police officers, including 1,045 who graduated just recently. Some 4,000 additional police officers will be trained and will have joined the HNP by 2016.

In 2013, the government has made acquisition of new equipment and materials for the police such as, vehicles, short and long guns to combat criminality.

Lamothe also referred to the response provided by the government following the collapse of 42 public buildings during the earthquake.

Ten public buildings and other facilities — the Ministries of Interior, Commerce and Industry, Foreign Affairs, Parliament, the high administrative Court, the Supreme Court, the Central Bank’s Convention Center, the Villa d’Accueil, socio- cultural facilities and administrative centers — have been built or are under construction, according to Lamothe.

At the macro-economic level, the prime minister said that the growth rate of GDP was 4.3% for 2013, compared to 2.02% in 2012, and an increase in the growth rate is expected for the year 2014. Exports have increased, thanks to the efforts made in the assembly industry, while public investment has registered a growth of 8%.

In the agricultural sector, rice production has increased by 18%, egg production by 300%, while bank loans to the construction sector grew by 25% this year.

The Minister of Agriculture Jacques Thomas has, for his part, indicated that the production of yams and manioc increased by 42%, banana production by 40% and the production of dry beans by 10%, while cornmeal production grew by 66% (about 335,000 tons for the year 2013).