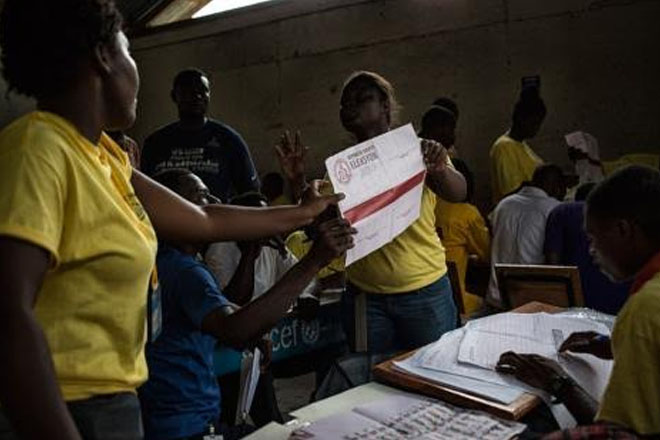 New York, USA — With the holding its first round of elections on August 9th this year to renew the executive legislative and local leadership of the country, Haiti is taking “resolute” steps in renewing its democratic institutions, the top United Nations official for the country told the Security Council on Thursday.

Presenting the secretary-general’s latest report on the work of the UN Stabilization Mission in Haiti (MINUSTAH), which she heads, Sandra Honoré said the country is also moving resolutely towards the re-establishment of institutional balance.

After a prolonged period, the Electoral Council published the results on September 27th, according to which there were ten contenders who won an outright victory for Senate and lower chamber seats. However, 25 electoral districts will require re-elections due to electoral violence.

“Notwithstanding the efforts of the Electoral Council, the government and the Haitian National Police (HNP), severe acts of violence and some technical irregularities invalidated the 9th August vote in 13 percent of the country’s voting centres,” she added.

She commended the actions taken by the Electoral Council to address the shortcomings, responding to recommendations from political parties and implement corrective measures.

Further, she pointed out that for the first time in Haitian electoral history, the Electoral Council took punitive action against instigators of electoral violence. Members belonging to ten political parties were barred from further participation in the elections and 17 political parties were issued warnings for instigating criminal acts and voter intimidation.

She also noted the commitment expressed by the Haitian National Police (HNP) to undertake measures to improve police performance in the upcoming round, to ensure a stable electoral climate.

On a related note, she added that work continues towards the implementation of the HNP 2012-2016 Development Plan, which is now in its final year. The UN is working towards reshaping its assistance, to acknowledge progress and concentrate its action where criminality affects most the main security indicators, such as homicides and gang confrontations.

“I encourage member states to provide experts in administrative, technical and operational support in the form of government provided personnel as well as specialized teams in key fields of policing, with a view to creating longer-term post-MINUSTAH partnerships among the Haitian National Police, donors and other international partners,” she added.

She went on to tell the Council that in order to sustainably transfer such activities and other responsibilities of MINUSTAH, and mindful of the transition process of the Haitian authorities, Secretary-General Ban Ki-moon has recommended the extension of the Mission for another, and possibly, final year.

“An integrated strategic assessment mission will be deployed after the completion of the electoral cycle and the installation of a new president and authorities to formulate recommendations for the future presence of the United Nations in Haiti,” Honoré explained.

However, she stressed that for now, despite the near-success of the August 9th polls, the engagement of the UN system, including MINUSTAH and its uniformed components, continues to be required in support of operations, logistics and security in Haiti.

She also specified that despite the substantial budgetary allocations assigned by the Haitian government, including as largest donor to the UN Development Programme (UNDP)-managed Basket Fund, the financial contributions of Haiti’s international partners continue to be critical for the completion of the electoral cycle.