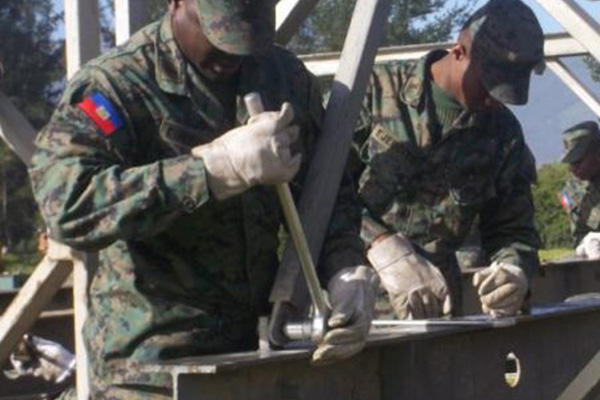 Port Au Prince, Haiti — The Haitian National Defence minister, Rodolphe Joazile, announced on Thursday that the new military force was now effective, with the launch of operations by its corps of engineers already busy building roads and assisting the Caribbean country’s population in different development and civil protection assignments.

Joazile said some 40 military engineers and other technicians have been conducting, under the leadership of their coordinator Eng. Rodrigue Crève-Coeur and their base chief commander Lieutenant Ted Wolsby Tesnor, a series of development and infrastructure works to help communities in their struggle to overcome a number of obstacles that slow down progress.

“The force is now effective and they have already started to carry out a number of development and community tasks,” Joazile told HCNN on Thursday.

“It is no longer just a project, it is concrete reality,” he said.

Haitian authorities recognized that they do not have, for now, the means required to set up a military force in all its components and services, but argued that starting the new force with one of its very useful components, the engineering corps, has actually proved to be very beneficial and appreciated.

“Generally, a military force has different services, such as air, maritime and land services,” said Joazile.

“Of course, today we don’t have the means to put all of them in place, but we can start, as we did, with the engineering component while we gradually staff and equip the other services as the means become available,” Joazile told HCNN.

The Corps of Military Engineering is building a 2 km stretch of road that leads to the famous and historic 365-door Palace, a tourist attraction in the Petite Rivière district in the Northern Artibonite area. The Haitian military are also erecting or repairing bridges and paving 6 additional kilometers of road leading to the Crête-A-Pierrot old fortress.

The new Haitian military, which has suddenly become very popular in the Artibonite area where they are based for now, will build a public square outside the Crête-A-Pierrot fortress, which will be a recreation site for inhabitants of the area.

The director general for the defence department, Carel Alexandre, announced that the military will be operational on the highway #1 leading to the capital city of the northern Artibonite region, which will host Haiti’s biggest cultural event at the beginning of next month, the national Mardi-Gras carnival, which usually attracts hundreds of thousands of merrymakers.

“They will be equipped with ambulances, tractors, loaders, trucks, brooms and other equipment to provide emergency aid in case of accidents, to clean and to ensure the maintenance of the city of Gonaives and the repair of adjacent roads,” said Alexandre, who is a former army captain.

The Haitian army was disbanded in 1995 by then-president Jean-Bertrand Aristide, who had returned to the country from a three-year exile in Washington, following a September 30, 1991, bloody military coup. Aristide regained his presidential seat in October 1994 and completed his five-year term in February 1996, after the collapse of the military regime under US pressure and imminent use of US military force.

Haitian president Michel Martelly had promised during his electoral campaign to reinstate the army or establish a new military force to fill the vacuum that will be created by the expected departure of blue berets who were deployed to the country nearly ten years ago, as part of a UN stabilization mission, after Aristide had been forced from power in 2004 by an armed rebellion, during his second presidency.

The deployment of the new military engineers and technicians and the actual launch of their operations are the first concrete and evident facts confirming the establishment of the new Haitian military force.

The contingent of military engineers operates from a former base occupied by Ecuadorian peacekeepers who, last year, handed over the facility to their Haitian counterparts who graduated from the Eloy Alfaro military school and Los Vencedores del CENEPA of Ecuador after completing ten months of training and a period of field experiences.

The new force will not be involved in daily security tasks devoted to the police, but will be, when available, deployed in border areas, will be called for backup in case of natural disasters or in other circumstances where they can help protect vulnerable populations.

Many had feared that the new military would turn to the old human rights violations that used to be common currency with the old army that was playing a law enforcement role, such as executing search and arrest warrants, interpellations, among other tasks.

“There is absolutely no possibility for members of this new force to be involved with human rights abuses because they will not be attributed any assignments which could put them in a position to do so,” Joazile assured.