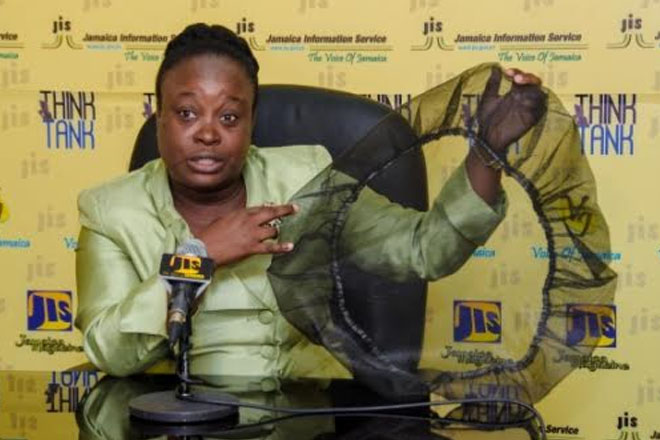 Kingston, Jamaica (JIS) — The Ministry of Health has developed a cover for the 45-55 gallon drum to minimize the breeding of the Aedes Aegypti Mosquito, which is the implicated vector of the Zika Virus, which now threatens the Caribbean region.

Speaking at a JIS ‘Think Tank’ on June 10, Medical Entomologist in the Ministry of Health Sherine Huntley-Jones, explained that from routine surveillance and data collection, the public health team has noticed that the 45-55 gallon drum is the main breeding habitat for the mosquito.

“Having identified the drum as the main source for mosquito breeding, we have come up with a drum cover for 45 – 55 gallon drums that we will introduce to the population to assist with reducing the breeding of the vector, which is also responsible for the transmission of Dengue and Chikungunya viruses,” she explained.

The medical entomologist explained that the cover is made of mosquito netting and resembles a large hair net, bordered with elastic to fit over drums of varying sizes.

“This cover is what we want to roll out, especially in our high risk communities for usage in terms of covering up those drums, because we believe that once we deal with the breeding in the drums, we would have significantly reduced the Aedes Aegypti population and then reduce the risk for transmission,” she said.

“Almost every home has one such drum being used for collection and storage of water and they are almost always uncovered. We came across one particular community in St Catherine during the CHIKV outbreak where every yard in that community had no less than 10 of these drums teeming with Aedes Aegypti mosquitoes,” Huntley-Jones added.

She said that when the drums were shown to one dweller who had been afflicted with the disease along with other family members, she was very nonchalant about the presence of the drums, not realizing that she had been producing the vector that was causing her to be sick.

Huntley-Jones pointed out that the cover, which was developed by the South East Regional Health Authority public health team, will allow for the catchment of water, but will not allow for mosquitoes to enter or exit the container, and that the elastic facilitates stretching, depending on the size of the container.

“We want to market it to parish councils and councillors and encourage community members to either get into the production of it or purchase for use in their communities,” she said.

There is no reported case of the Zika virus on the island, but the ministry officials are closely following one suspected case in the Dominican Republic.