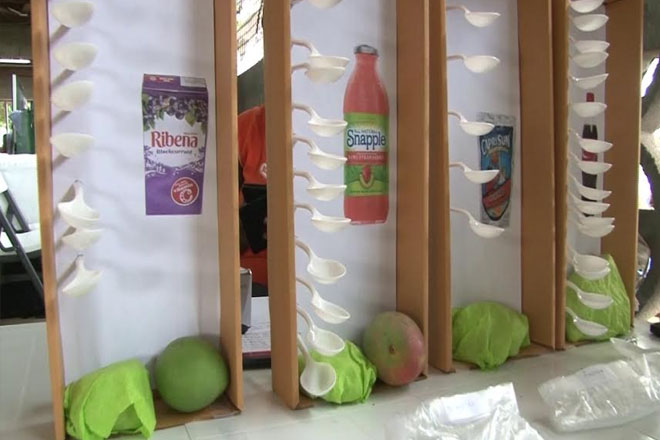 (SKNIS): “What’s in your drink?” was asked and answered by the Health Promotion Unit in the Ministry of Health at this year’s Agriculture Open Day when its representatives gave patrons an eye-opening revelation pertaining to the amount of sugar in drinks that many nationals consume on a regular basis.

The stall which had the theme of “What’s in your drink?”, displayed pictures of packaged soft drinks along with spoons representing the number of tea spoons of sugar that the specific drinks contained. There was also the written amount of grams of sugar as well as a mini-plastic bag containing the specified portion of sugar for each drink.

The idea for the display was conceived by Nutrition Officer, Chere Ann Weaver, who explained the objective of the booth.

“We want people to get a better idea of the amount of sugar that is inside of our drinks,” Ms. Weaver said, explaining that diabetes is no longer an adult disease. “We have cases of children with Type 2 Diabetes (controlled with oral medication and lifestyle changes) and yes there is Type 1 Diabetes (controlled with insulin injections and lifestyle changes) as well. So we want to be mindful of what we’re giving our children and what we’re giving ourselves. If we look at something like Coke, Coke and sodas are a big deal in the Caribbean and in St. Kitts. Coke has 15.75 teaspoons of sugar and that’s just in one drink.”

Ms. Weaver went on to explain that the human body only requires 50 grams of sugar in a day and Coke has in 63 grams, which means that once a Coke is consumed, the individual is already past the daily requirement for sugar. In fact, it is surpassed by 13 grams of sugar. When analyzed, for sugar content, Lucozade, another commonly used drink was described as the Caribbean’s version of the American-produced Gatorade.

“We (in St. Kitts) are no longer doing the things we used to do – no longer exercising as much, working the ground, not playing outside with the children,” Ms. Weaver said. “The children are playing video games, watching television, we are looking at our shows – but yet we are drinking these drinks that are energy drinks, as a regular drink.”

The Agriculture Open Day was seen as the appropriate place to find ideas to cultivate healthier drinking habits.

“We’re here at the Agriculture Fair, we’re encouraging persons to look around when you go to the other booths, look at the fruits and vegetables that are around and think of creative ways that you can make your own drink and also blend up some fruits and vegetables and make your own drink, turn them into a smoothie,” Ms. Weaver said, explaining that several patrons had admitted that they were addicted to drinking sodas. “We’re encouraging you, if you have two or three sodas for the day – swap a bottle of soda for a bottle of plain water or you can cut up some fruit inside of your plain water and you get your own flavoured water, without the additives.”

When asked about the visitors’ response, the Nutrition Officer revealed that most persons were “flabbergasted” by the amount of sugar in Coke and Gatorade, especially. She said persons seemed to instantly rethink the type of drinks they give their children, particularly the Ribena box drink. Her advice to residents of St. Kitts and Nevis – “If you want to do the best for your body, make your own drink at home, try to stay as local as possible,” Ms. Weaver said.