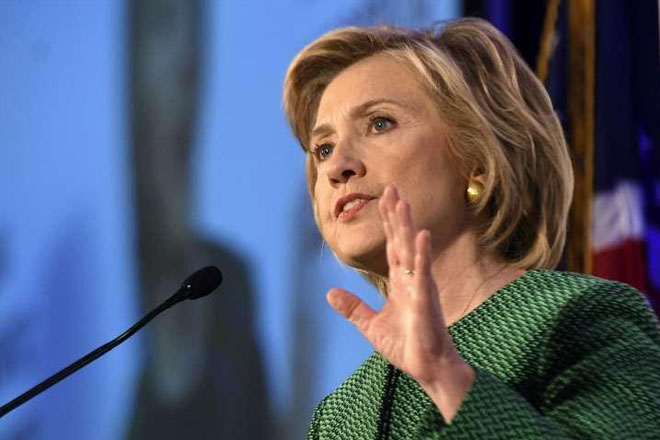 Hillary Clinton, Ever a Voracious Student, Prepares for Benghazi Hearing

(MSN) – For days, Hillary Rodham Clinton has been sequestered inside her red brick home in Washington, poring over events that happened more than three years ago and half a world away.

Her preparations for the hearing on Thursday before the House of Representatives’ Benghazi committee have included reviewing broad themes, operational details and the innumerable emails related to the September 2012 attack on the United States Mission in Libya.

But for all of Mrs. Clinton’s mastery over the substance related to Benghazi, the hearing in many ways will amount to a test of patience and will: To succeed politically, she must remain calm, take every question seriously and avoid outbursts during what is expected to be a daylong appearance, even amid her private frustration over what she sees as a Republican-led effort to hurt her presidential prospects.

“They’ll try to attack the secretary on emails, question her server, feign righteous indignation,” said Representative Adam B. Schiff, Democrat of California, who has been highly critical of the committee’s motivations. But mostly, Mr. Schiff added, “They’ll hope to wear the secretary down.”

Mrs. Clinton’s testimony, in the Capitol Hill hearing room where she appeared as first lady to defend her proposed health care legislation in 1993, is expected to last eight to 10 hours. And although the committee will devote most of the inquiry to the security at American outposts in Libya and the response to an attack that killed four Americans, including Ambassador J. Christopher Stevens, the lines of questioning will also touch on her broader tenure at the State Department.

“Unless there is a new set of facts, which I firmly doubt,” said Thomas R. Nides, who was deputy secretary for management and resources under Mrs. Clinton and testified about the Benghazi attacks in 2012, “I don’t see how the testimony is going to be dramatically different than 18 months ago.”

But Mrs. Clinton was not a presidential candidate during previous inquiries into the Benghazi attacks, and on Thursday, members will probably also highlight wider questions about her tenure at the State Department, her dependence on the advice of a cadre of political aides and her overall approach in Libya. Mrs. Clinton had pushed the White House to join a NATO-led coalition to oust Col. Muammar el-Qaddafi, a move that is widely seen as contributing to the chaos and instability in the country and region.

“The idea that a blood bath of innocent people was imminent in western Libya had the West not intervened just did not bear out,” said Paul R. Pillar, a former C.I.A. analyst who teaches at Georgetown University. “It’s going to be a hazard for her.”

The Clinton campaign and a “super PAC” supporting her candidacy have braced for broader attacks on her record at the State Department, each releasing videos about her diplomatic accomplishments and the million miles she traveled. The campaign has enlisted more than 40 foreign policy experts to offer advice, recommendations and feedback, and in many ways, the hearing is a pivot point as Mrs. Clinton’s campaign expands its focus from domestic issues to international affairs.

In an email, Jake Sullivan, the campaign’s policy director and a former aide to Mrs. Clinton at the State Department, pointed to her involvement in the sanctions that led to the Iran nuclear deal, in the 2012 cease-fire in Gaza and in the prioritizing of women’s rights globally as “major assets” that “we plan to elevate and embrace” throughout the campaign.

Mrs. Clinton has dismissed the Benghazi committee as a “partisan arm” of the Republican National Committee and called Representative Kevin McCarthy’s comments linking the investigation to her declining poll numbers “deeply depressing” and a “grave disservice” to the Americans killed in Benghazi.

But the former secretary of state, always a voracious student, has also prepared assiduously.

After an intense campaign schedule following the first Democratic primary debate last Tuesday, Mrs. Clinton has had no major events or fund-raisers the past several days. And her aides say that in many ways, preparing for the hearing is more difficult than a debate, for which a candidate can usually anticipate questions from a neutral moderator. Testifying before the Republican-led committee means Mrs. Clinton must contemplate the political motivation behind each inquiry; with every response, she must also anticipate the political traps, these advisers said.

“It’s easier in terms of substance; the harder part is the political dance involved,” said Lissa Muscatine, a longtime friend and speechwriter to Mrs. Clinton, adding, “You have to be really smart in how you actually respond to questions that might have ulterior motives.”

Mrs. Clinton has experience testifying before Congress and knows how mentally exhausting the experience can be. In addition to the 1993 testimony she gave about the Clinton administration’s proposed health care overhaul, Mrs. Clinton faced extensive questioning in 2009 during the confirmation hearings to become secretary of state.

She previously testified about Benghazi on May 8, 2013. Before that, two deputy secretaries of state, William J. Burns and Mr. Nides, testified in December 2012, after Mrs. Clinton sustained a concussion after fainting and was unable to testify.

Political critics will be looking for even the slightest sign of indifference or impatience on Thursday.

In 2013, after being pressed about whether the attack sprang from protests or a spontaneous raid, an exasperated Mrs. Clinton waved her hands and replied, “What difference, at this point, does it make?” — a scene that became fund-raising gold for Republicans.

Mrs. Clinton and her advisers have not been holding mock hearings, as they would in debate preparation, but rather have been memorizing dates and facts. And they are scrutinizing every piece of email correspondence that the committee may raise, in case members take quotations out of context.

“That has to be a question in your head, ‘When I read this email, do they see it the same way I see it?’ ” said Minyon Moore, a Democratic operative and former White House adviser to President Bill Clinton.

Republicans say Mrs. Clinton may plant her own political land mines to critically wound the committee — whose reputation and relevance has already been badly damaged by reports of political motivations.

And Mrs. Clinton has a history of disarming congressional committees with a personal and heartfelt opening statement, an approach that could be used on Thursday. As first lady, Mrs. Clinton said she appeared before the health care committee as “a mother, a wife, a daughter, a sister, a woman” and praised Representative John D. Dingell Jr., Democrat of Michigan, who was on the committee.

She arrived armed with witty comebacks and poured herself hot tea from a delicate porcelain teapot as congressmen lobbed arcane health care questions her way.

At one point, Representative Dick Armey, Republican of Texas, compared the health care plan to “the Kevorkian prescription for the jobs of American men and women.” He later promised to try to make the debate “as exciting as possible.” Mrs. Clinton quipped, “You and Dr. Kevorkian.”

“The Clintons have a lifetime of working their way through the hot seat,” he said. “Republicans will allow their frustration to cloud their judgment, and they’ll overstep and she can walk out the door the victim.”