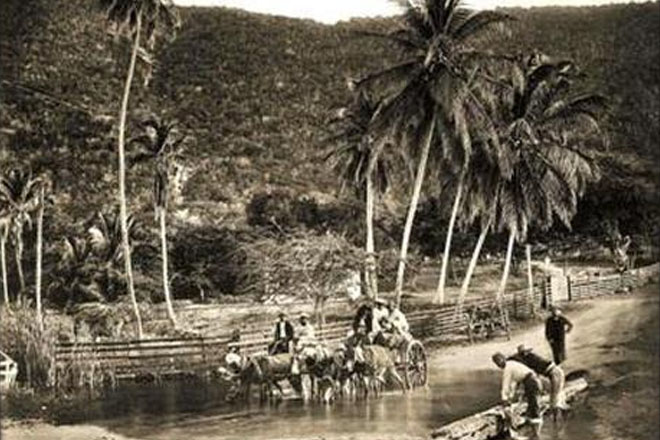 Historical portrait of Jamaica showcased in photography exhibition in Miami

Miami, USA — In 1891, as Jamaica’s economy was in the doldrums, a group of local businessmen hired a world famous photography studio to take photographs portraying the island as a commercial and touristic paradise. The images – taken by Valentine & Sons of Scotland – have been privately collected and will go on display at HistoryMiami as part of the museum’s upcoming exhibition Awakening Jamaica: Photographs by Valentine & Sons, 1891, on view from August 6 to November 1, 2015.

The photographs were exhibited at the 1893 World’s Fair in Chicago in the Jamaica Pavilion, but were mostly forgotten soon after, and the negatives were destroyed in 1961. Photo archivist Patrick Montgomery of the Caribbean Photo Archive has been tracking down and acquiring original prints of the 1891 photographs over the course of the last ten years. The prints will be displayed together for the first time since the Chicago fair.

“This was an ambitious project for the time and, while it unfortunately did not directly lead to the economic development for which it was intended, this project is historically relevant as an invaluable documentary record of Jamaica at the end of the 19th century,” said president/CEO of HistoryMiami, Stuart Chase.

The groundwork for the exhibition began in 2013, when Montgomery donated a portfolio to HistoryMiami’s collection containing eight prints, an historical map of Jamaica and a facsimile copy of the 1893 book World’s Fair, Jamaica at Chicago; reawakening curiosity about the photographs while creating the connection between Montgomery and the museum that led to this exhibition.

On display will be more than 50 original prints and additional items from Montgomery’s private collection. HistoryMiami will offer visitors the chance to learn about the creation and impact of the images, featuring urban and unspoiled rural views of the island in the late 19th century. Visitors will also be given the opportunity to learn about the art of photography at that time and how the prints were made. Also on display will be archival items related to the studio of Valentine & Sons and the 1893 Chicago World’s Fair.

“These photographs provide not only a glimpse into Jamaica’s past, but also a representation of the quality and beauty that 19th century photographers could achieve,” said Montgomery. “Original prints such as these, made directly from large glass negatives for the tourist market, were soon after displaced by amateur snapshots and postcards, and became obsolete relics banished to attics.”

This is the second exhibition that is part of the activities of the HistoryMiami Center for Photography, the first of its kind in the greater Miami area. The Center places curatorial emphasis on documentary photography and its core mission is to collect, safeguard, and share the images that tell the stories of our community and illuminate the Miami experience.