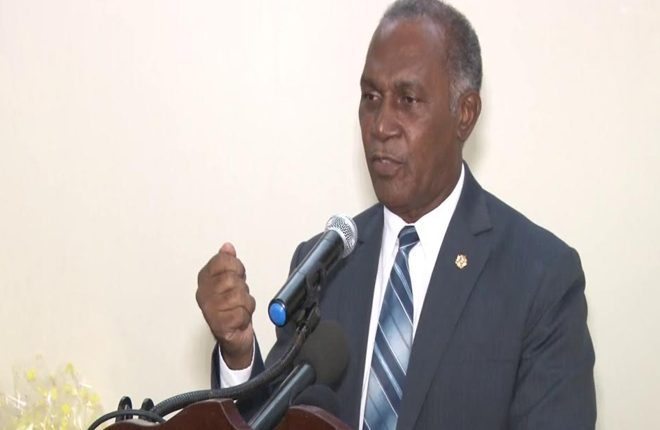 (SKNIS): In giving the keynote address at the International Men’s Day Awards Ceremony, Premier of Nevis and Senior Minister of Nevis Affairs, Labour, Social Security and Ecclesiastical Affairs, Honourable Vance Amory invited parents and society at large to raise positive boys who are confident in themselves and have the ability to become good leaders.

He gave this admonition while giving some key points that he said could be used to reverse the negativism in today’s society. He said rather than criticizing, positive action should be taken.

“We need to develop positive programmes to give our boys the opportunity to develop good values and good qualities,” Premier Amory said. “A boy does not have to be rough to be a man. He does not have to demonstrate crudeness to be “bad boy,” if he wants to be accepted. We need to begin to get this inculcated in the minds of our male children and also in our girls as well from the very earliest years. We are now dealing with the symptoms of seeds which were planted years ago or neglect which happened years ago.”

He added that boys should be enrolled in organized sports that promote discipline and teamwork, and that there should be social interaction for the development of social graces and the demonstration that being respectful and respectable are values that should be cherished. Parents were encouraged to give boys duties and actively teach and show them that for every action there is a consequence; volunteerism was also described as a necessity.

The senior minister implored societal groups to organise cultural activities to teach a sense of belonging while schools were advised to take part in the process of making a difference by observing when children were having issues that needed to be addressed. He also emphasized that fathering a child had to be taken as a serious responsibility.

Premier Amory noted that the issues of underachievement in both genders, absentee fathers, indiscipline, and disrespect were rampant and needed to be redressed and turned around. He said that the millions of dollars spent on fighting crime could be spent elsewhere.

“That’s how I want us to begin to think, what if we can turn this thing around,” Premier Amory said. “What if we can do some simple things which could change the direction in which we are going. And what if each one of us men, women, boys, girls can take a responsibility to say I am going to make a difference, first of all in my life in the way I see things, in the way I do things. I am going to become a much more pleasant, a much more cordial and a much more amicable person.”