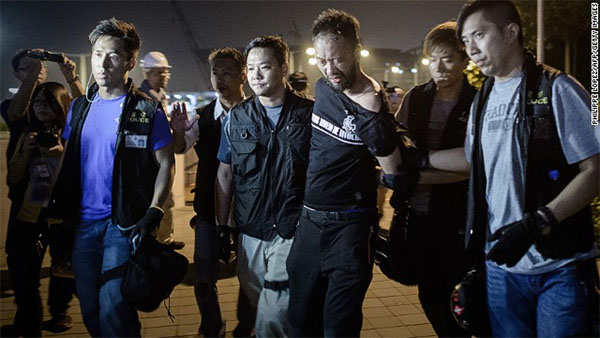 Hong Kong (CNN) — Hong Kong authorities have vowed to conduct an impartial investigation into a video which appears to show several plainclothes police officers beating up a detained pro-democracy demonstrator.

The widely circulated video shows officers carrying the man to a dark corner, where he’s laid on the ground and repeatedly kicked and punched while others stand around, apparently keeping watch.

“The Complaints Against Police Office has already received a relevant complaint and will handle it in accordance with the established procedures in a just and impartial manner.”

Hong Kong’s Secretary of Security Lai Tung Kwok told reporters the “officers involved will be temporarily removed from their current duties.” He declined to take questions.

Embattled Hong Kong leader C.Y. Leung said there was a set and effective mechanism in place to deal with complaints against police. “We will use the same mechanisms and procedures to deal with the complaint against the policemen on the incident last night,” he said.

The victim has been identified as Ken Tsang, a member of the Civic Party, who’s also a social worker and a member of the 1,200 member election committee that choses Hong Kong’s leader.

Civic Party leader Alan Leong told CNN: “This is an apparent abuse of police power that a society as civilized as Hong Kong would definitely not swallow. I would advise the commissioner of police to immediately arrest the six officers involved in that attack.”

Tsang’s lawyer Dennis Kwok said, in the early hours of Wednesday morning, “six or seven police officers” led his client to a corner where they punched and kicked him.

“It was unprovoked and unnecessary for anyone to use that kind of violence on an arrested person,” Kwok said. He said some people had accused Tsang of pouring water on police, but “whatever he was doing he was already arrested, his hands were cuffed and the proper procedure was to take him into custody and deal with him in accordance with the law.”

Amnesty International called for the prosecution of any officers found to have acted unlawfully. “It is stomach-churning to think there are Hong Kong police officers that feel they are above the law,” said Mabel Au, the group’s Hong Kong director.

One of protest groups — Occupy Central With Love and Peace — circulated photos showing large circular welts on Tsang’s back, bruising on his face and scratches on his neck and arms.

Another main protest group — The Hong Kong Federation of Students — issued a statement calling for the resignation of Police Commissioner Andy Tsang Wai-hunh, and other police commanders involved in preventing protesters from re-occupying Lung Wo road on Tuesday night.

The road runs past the central government offices, and is near the main Admiralty protest site, the epicenter of the week’s long standoff between protesters and police.

Protesters accused police of using pepper spray during the operation, which succeeded in clearing the road for traffic. A total of 45 people — 37 men and eight women — were arrested for alleged unlawful assembly and obstructing police officers, police said.

Authorities accused them of behaving “in a disorderly manner,” throwing traffic cones, snatching police barriers and building road blocks. Four police were injured in the operation, according to a government statement.

During the attempted takeover of Lung Wo road, demonstrators declared they were “not afraid of anything.”

“Ask them if they’re afraid of bullets. They’re not. This is our last chance. We know we’re most likely going to fail, but we have to try,” said 62-year-old demonstrator Lo Cheong.

Retaking Lung Wo road was necessary “to protect the protesters,” said a demonstrator named Bon.

In a statement released on Wednesday morning, police appealed to protesters in the area to “stay calm and restrained.” “Protestors advancing against Police cordon line even with their arms raised is not a peaceful act,” the statement said.

By dawn, morning rush-hour traffic was flowing as normal. The contingent of demonstrators relocated to a park near the government offices, to a green space that they’re occupying with tents.

Since late September, protesters from a number of pro-democracy groups have been blocking major roads, demanding a greater say in who leads the Special Administrative Region of China.

At the peak of the protests, tens of thousands of demonstrators crowded onto the streets, calling for the resignation of leader C.Y. Leung, and demanding the right to be able to nominate candidates for the next election in 2017.

Protesters have been guarding barricades erected at protest sites at Admiralty, Mong Kok and Causeway Bay, and for many nights slept in the open air on the asphalt before the arrival of reinforcements with tents over the weekend.

Traffic in the other parts of the city has been clogged due to road closures, bus and tram cancellations and the need for cars to drive around the protest sites. Taxi drivers say their takings are down, and businesses claim the protests have cost them income.

Hope that the two sides might be able to solve the impasse evaporated on Thursday when the government canceled talks planned with student groups, after protest leaders urged supporters to keep up the occupation.

On the weekend, Hong Kong’s chief executive told local free-to-air station TVB that the protests were not a “revolution,” but a “mass movement that has spun out of control.”

He said student leaders had “almost zero chance” of pushing Beijing to change its stance on how Hong Kong’s leader is elected. He added he would not submit to the protesters’ demands that he resign, because his resignation “will not solve the problem.”

“It is because the students and other occupation protesters demand more than that. They want the Standing Committee to withdraw its August 31 decision. That is impossible,” he said.

He was referring to the white paper issued by the Standing Committee of China’s National People’s Congress stating that Hongkongers would be able to vote on their leader in 2017, but only from an approved shortlist of candidates.

In response to Leung’s comments, the three main groups leading the occupy campaign said it was the government that was out of control — “a government that fires tear-gas at unarmed citizens and unilaterally terminated dialogue with the students (sic).”

On September 28, police fired 87 tear gas rounds into the crowd after protesters failed to disperse. The move was seen as a miscalculation and only served to garner support for the protesters, who accused the government of heavy handedness and of stifling free speech.