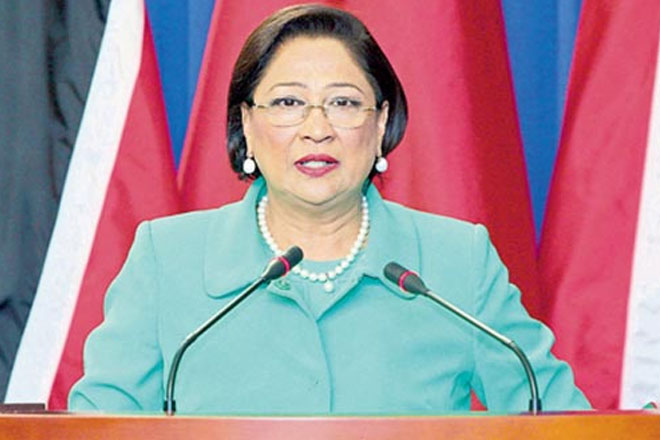 Port of Spain, Trinidad (Trinidad Express) — In six sentences, Prime Minister Kamla Persad-Bissessar last night responded to the Police Service revelation that marijuana had been found at her home two years ago, and that a criminal probe was now underway.

Shortly before 10p.m., Persad-Bissessar issued a statement, saying that the timing of the investigation was “political” and she expected that the police investigate their own conduct, and that of other law enforcement officer involved in the discovery.

Persad Bissessar said: “Today the police have commented on a substance they reportedly found on the common grounds outside of my residence more than two years ago.

These grounds are under the control of state security services, including the army, special branch and the police. Many staff, workmen and other individuals are allowed by security services onto the property each day.

I was out of country when security services are reported to have made this discovery.

Needless to say, I am horrified and disturbed to hear these reports.

While the timing of this disclosure is clearly political, I have faith in the police to investigate their own conduct and that of all the law enforcement professionals involved”.

Claims that marijuana had been found at Persad-Bissessar private residence at Phillipine, was first made in a Sunday Express report by political leader of the Independent Liberal Party, Jack Warner who is fighting extradition after being indicted in the United States on multiple counts of corruption, money laundering and racketeering linked to his time as a FIFA vice president.

Warner, in a statement submitted to a Justice of the Peace last week, claimed that on Friday April 12, 2013, former deputy Commissioner of Police Mervyn Richardson came to the Parliament and informed him (Warner) that a packet containing four ounces of marijuana was found outside a window of Persad-Bissessar’s private Phillipine residence.

Warner, then the National Security Minister in the Peoples Partnership government, claimed that he called Housing Minister Dr Roodal Moonilal who advised him to contact the Prime Minister who was in New York at the time.

Warner claimed when he contacted the Prime Minister, she was surprised and enquired whether she should return home immediately and resign. He claimed that he advised Persad-Bissessar to not resign as he and others- Richardson, Moonilal as well as former national security adviser Gary Griffith – would cover up the ganja find.

In the Sunday Express article, investigative reporter Denyse Renne said she was shown a copy of a police diary extract which stated that 113 grammes of marijuana were found at Persad-Bissessar’s house during a routine patrol at around 7a.m. on April 12.

Richardson, Moonilal, and Griffith have all since denied the claims.

And on Monday, Acting Commissioner Williams said he sought to verify the claims made by Warner “and there is no report recorded in the police service concerning a matter like that. I was head of the police service at that point in time and that matter was not brought to my attention”.

However, the Police Service issued a statement on Tuesday which read:

“The Commissioner of Police was advised by Snr Supt Jacob on Monday, June 15, 2015, of the absence of any official police record of the alleged discovery,” the release stated.

“However, today Tuesday, June 16, 2015, the Commissioner of Police was presented with a signed report from Snr Supt Gould, which confirmed the discovery of five grammes of a ‘plant-like material’ resembling that of marijuana, contained in a plastic bag in the male washroom of a gazebo on the western end of the Prime Minister’s private residence at Phillipine.

“The report, which was submitted to the Commissioner of Police at 2 p.m., stated that the discovery was made on Friday, April 19, 2013, at around 8.50 a.m. by a member of Special Branch.

“Given the report now made available to him, the Commissioner of Police has ordered an investigation into the matter,” the release stated.

Assistant Police Commissioner Ainsley Garrick has been ¬appointed to conduct the investigation”.