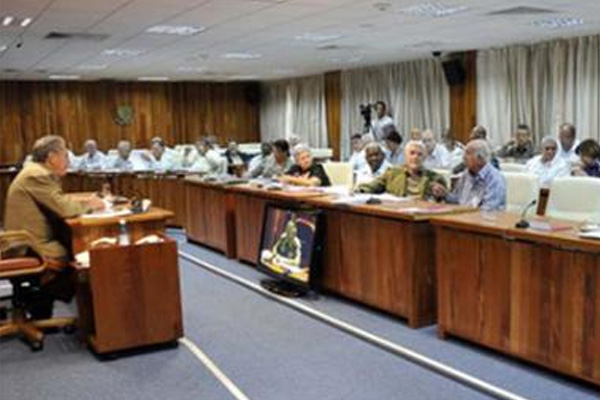 HAVANA, Cuba (ACN) — President Raul Castro headed a meeting of Cuba’s Council of Ministers last Saturday in which he called for deeper analysis of the challenges that continue to affect the country’s economic growth.

“We have a huge challenge ahead, and we must not let the problems overwhelm us,” he noted.

Economy and planning minister Adel Yzquierdo submitted the economic report for the first semester of this year by explaining that although the Cuban economy grew compared to 2013, expected levels will not be reached, indicating a greater economic slowdown than foreseen. He said that the country’s gross domestic product (GDP) will grow some 1.4 percent by the end of the year.

As to the investment plan, the minister pointed to a 95 percent estimate by the end of 2014.

Government vice-president Marino Murrillo Jorge referred to the ongoing currency unification process by explaining that some actions have included the training of personnel at different entities in order to carry out the program.

However, he insisted that the currency unification by itself will not solve all the problems facing Cuban economy, but it is a crucial part of the whole process, which takes other policies aimed at increasing efficiency and productivity.

Murillo also referred to the new Foreign Investment Law, which comes into force on June 28, and to a gradual process that gives larger autonomy to government companies, implying more responsibilities for executives, officials and members of that sector.

The vice-president said that at present a total 249 cooperatives are in operation in different economic sectors, while self-employment counts on over 467,000 workers and the figure is expected to keep growing.

General Comptroller Gladys Bejerano referred to indiscipline and illegalities by explaining that these irregularities continue to take place due to inefficient control systems to detect them in time.

“The evaluation of these acts is not always carried out with the necessary criticism and self-criticism on the part of those who are responsible for the control and supervision of the work of their subordinates,” said the official.