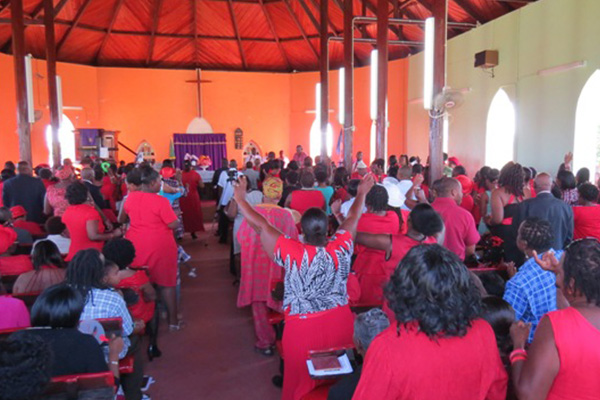 Basseterre, St. Kitts, (CUOPM) — St. Kits and Nevis’ Prime Minister, the Right Hon. Dr. Denzil L. Douglas on Sunday paid tribute to those who have helped him to celebrate his 25th anniversary as a Member of Parliament,

“I am extraordinarily grateful to the people of St. Pauls, where I was born – warm, wonderful, embracing St. Pauls – where I have been loved and lifted up by my people all my life, making it really a source of faith and encouragement, support and fidelity that goes from strength to strength as i have moved from one phase of my own political career to another,” he told hundreds, including a delegation from Nevis,  at a Special Church Service on Sunday morning at the K.G. Swanston Memorial Methodist Church in Dieppe Bay.

Quickly pointing out that it was not only St. Pauls that has been a source of support and strength, faith and encouragement, the St. Kitts and Nevis leader also thanked the other area of the St. Christopher 6 constituency that he represents.

“Because the people of Dieppe Bay and Saddlers, Parsons and Newton Ground, Harris’ and Lynches and Lavington, as well, they all have always embraced me and stood with me, as well for the last 25 years,” said Prime Minister Douglas, who added: “This morning more than any other time, I want to say how much I thank you for that support. Indeed it was all of these people, in all of these villages and communities who, along with St. Paul’s people of 25 years ago, decided to permit me to represent them in our nation’s Parliament and continued to put their faith in me in 1993, again in 1995, in 2000, in 2004, in 2010 and again I believe in 2015.”

He said it was that first step, Church, that pivotal first step, taken by the men and women of this Constituency, that led to the historic journey that St. Kitts and Nevis as a nation, have taken together, ever since.

“Permit me to say here, Church, that one of my earliest memories is of my own dearly departed father waking me together with my siblings each morning, before the sun had even risen, before he would step out of our house in St. Paul’s to have morning devotions.  These many years later I thank him, and I bless him for that and I want to thank my own siblings, those who are older than me, and all of them are, for really looking after me – my mother having departed life when i was only year old.  Because instilling within me, from that time I was just four or five, recognizing that there was a Force far greater than any of us could imagine that made, has made all the difference in my life with the support of my father and my family. It has given me the strength and courage in the rough times, this special Force, this God that we know, has kept me quite grateful and humble in the good times as well,” Dr. Douglas told the congregation.

He used the opportunity to thank those who have assisted him in reaching this milestone.

“Among the very good things in my life, Church, are:  My family and my friends and I want to thank them all. Also the dedicated and highly valued members of my Cabinet – those of the past and those of the present – without whom the work of the Government would be impossible. I say sincerest gratitude to you, my dear Colleagues – now with me in Cabinet and my fellow candidates who will be with me in battle later on.  The many people throughout this Federation who have worked with and for me including my own Executive in this constituency, who have worked so diligently and with and for our nation; I will be forever in your debt,” said Prime Minister Douglas, who also thanked the thousands “who may not have ever worked for my Government, but who, nonetheless, are the sources of positivity, and guidance, and friendship. Thank you, and thank you again for being part of this development and experience over the last 25 years.”

“I want to emphasise Church, I have been given a mind.  And for 25 years now, I have used it to the very best of my ability, as the Parliamentary Representative for Constituency 6 and for the advancement of St. Kitts and Nevis generally,” said the Prime Minister.

He added: “I have been given strength.  Many ask me where do I get that strength from, and I have applied it unstintingly, almost to the limits of my endurance, to the many responsibilities with which I, as Prime Minister, must contend.”

The Lord does indeed reigns.

And so, we have been made to lie in greener pastures.

We have been truly led beside the still waters.

And He – the mighty Force – has restored our very souls.

The Lord reigns.  The earth is glad.