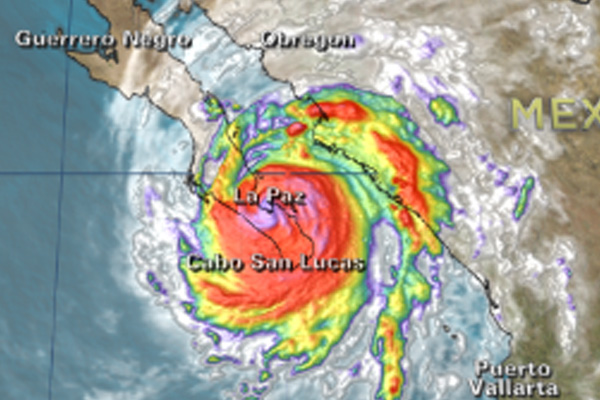 (CNN) — Hurricane Odile was downgraded to a Category 2 hurricane Monday morning, hours after making landfall at the southernmost tip of Mexico’s Baja California peninsula, according to that country’s National Meteorology Service.

Sarah McKinney was in Cabo San Lucas on maternity leave from her job in Arkansas, when the then-Category 3 storm hit with 125-mph winds Sunday night.

She and her newborn daughter, Madison, had already evacuated out of harm’s way from their first hotel to a second one. But even there, the room roared like a wind tunnel as Odile passed over.

McKinney piled up her belongings in the bathtub to protect them from the water seeping through the door to her room. She dammed it up with a mattress, but it still came in about an inch deep.

“I’ve cleared the beds and linen closets and have my daughter and I held up in the bathroom,” she told CNN.

“The pressure was horrific, but now it is eerily calm — just how people describe when the eye passes over,” she said.

But then the winds smacked the hotel again, and McKinney headed back into the bathroom.

“The backhalf is definitely worse,” she posted to Twitter. “More debris and stronger winds and rain. Bedroom is getting soaked from water seeping in.”