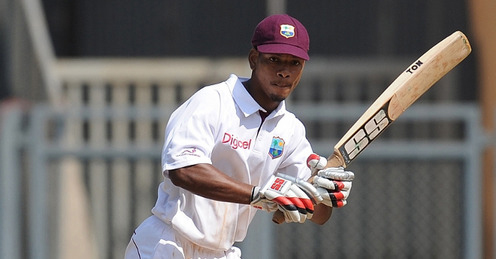 ‘I am more experienced now’ – Powell

(Sports) Florida, United States – Kieran Powell believes that his experience and maturity as a batsman will be a key factor in the upcoming tour of India, as he looks to bolster West Indies’ batting ranks.

Powell, who made 61 from three innings during West Indies A’s recent tour of India, said that despite the difficult conditions in the subcontinent, West Indies had the adaptability within the team to succeed.

“India is a difficult place to bat but it’s good once you can utilize the conditions there. It’s about adapting quickly. The upcoming tour is much different to the first time I toured India because now I have more experience,” Powell said.

“I also had more responsibility playing and leading the A team here last month (in the limited-overs games) and seeing that the pitches had more grass, I think I know what to expect.

“I made 80 last time I was on the Mumbai pitch and it’s a lot of good memories. It’s a wonderful place to bat and it’s extra special with Sachin’s (Tendulkar) farewell. The pitch can be a bit flat but mostly, it’s batsman friendly.”

Powell admitted that his development from a middle-order batsman to an opener was going according to plan, but that he needed a bit more consistency. “It should be interesting to look to the matches ahead with more games now under my belt,” he said.

“But also, I can’t wait to bat with Shiv [Chanderpaul] and I hope we both have wonderful tours and rack up a few centuries.”

Chanderpaul will be playing his 150th Test in Mumbai and Powell said that the Guyana batsman would be the crucial element in gluing the batsmen together.

“It’s always a pleasure to bat with and learn from Shiv. His 150th match is a great achievement and as a batsman, he’s one of the best to take notes from. He is critical to our motives in India.”

Powell said that batting first and putting India under pressure, would be crucial to their chances in the series, and he placed full faith in his bowlers to do the job.

“He keeps batters so aware and he’s a great find for us. He’s moving from strength to strength also and will be troubling. The pitches are tailored for him I think.”