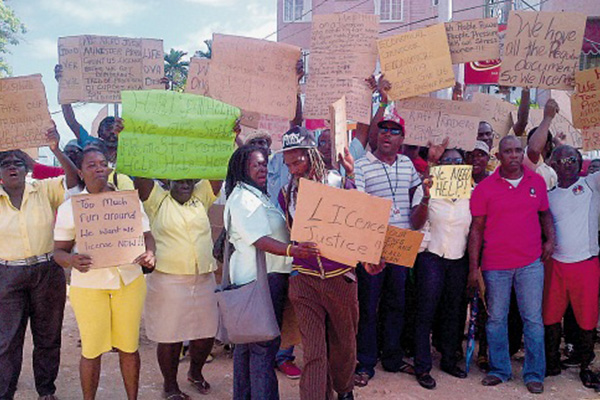 ‘I don’t have anybody to sell to’

Ocho Rios, St Ann — Claudia Brown wiped tears from her eyes as she protested alongside her craft vendor colleagues in Ocho Rios on Thursday.

A craft trader for over 20 years, Brown lamented that she is a single parent taking care of eight children and needs to be given the fair chance to make a living.

“Mi have mi children report fi go collect and can’t go because mi nuh have any fare and mi a work every day,” said Brown, who sells at Fern Gully Craft Market.

She complained that business “coming into the gully” had been slow, especially since work started there some years ago and without a trade licence, she was unable to go to the cruise ship pier to offer items to the tourists.

“We used to make money to help out situation, but now, nothing at all,” She said. “… I don’t have anybody to sell to.”

Brown, along with her colleagues from Fern Gully, Mammee Bay, and Swansea craft markets said they are fed up of promises made to have them join five other craft groups in the area to sell their wares on the cruise ship pier.

They said they have met all the requirements, including the necessary training, but after almost two years of waiting they were yet to receive the Jamaica Tourist Board (JTB) licence which would allow them to sell on the pier.

The vendors said the playing field was not level.

“Ocho Rios has eight craft markets, and [vendors from] five of them have obtained their JTB licence with the other three exempted from that process. The JTB licence gives the people the opportunity [to] go onto the pier, they can even go to the hotels. No one in the hotels will want to take them without the JTB licence, and because of that, it is creating serious suffering on the people,” explained Devon Mitchell, vice-president of the Jamaica Craft Traders Association.

“The present Government, specifically the minister of tourism, promised the people that they were going to give them the licence over two years now, and up to today they still don’t get any licence,” he lamented.

The vendors said that the previous Jamaica Labour Party Administration had allowed them to sell on the pier until the licences were granted, but that opportunity had been taken away from them.

Now the vendors are complaining that their wares have begun to rot.

“The T-shirts and all of those ‘dry-rotten’. We cannot sell bad things to the tourists. We have to dump them and that’s dumping our money,” Leroy Stennett of the Mammee Bay Craft Traders Association said.

According to him, one of the obstacles preventing them from receiving their licences is the fact that they are operating on privately owned lands. He wants the “relevant authority” to designate a piece of land for the Mammee Bay craft traders.

“Since we need a location to get this licence, grant us the location so you can give us the licence,” Stennett said.

“I have been at that location for 29 years and I still have kids in school. We are breadwinners, single parents; we need food on the table for our kids and ourselves and to have a better life. This is what is causing this problem in Jamaica,” an upset Stennett added.

A similar plight of not having a designated market is said to be affecting traders in Fern Gully. But chairman of the Ocho Rios Resort Board, Professor Roosevelt Crooks said that the parish council was addressing that matter.

The craft traders said they will continue to protest until they are granted the licences by the JTB. On Thursday, they were adamant that they needed a meeting with Minister of Tourism Dr Wykeham McNeill and state minister Damion Crawford.

“Usain Bolt do it with him foot; Tessanne do it with her mouth, and we do it with our hands,” said one vendor, emphasising that the talent of the Jamaican people was one of the things that bring tourists to the island.

On Thursday, the vendors threatened to take their protest to the Reynolds Pier, where a cruise ship was docked, but were dissuaded from doing so by the police and Professor Crooks, who asked them to take the fragility of the tourism product into consideration. He is expected to meet with them today.

Professor Crooks said he had been in dialogue with the various agencies and that the minister had intended to grant the vendors temporary licences to access the pier. He was, however, unable to say what was preventing that from happening.