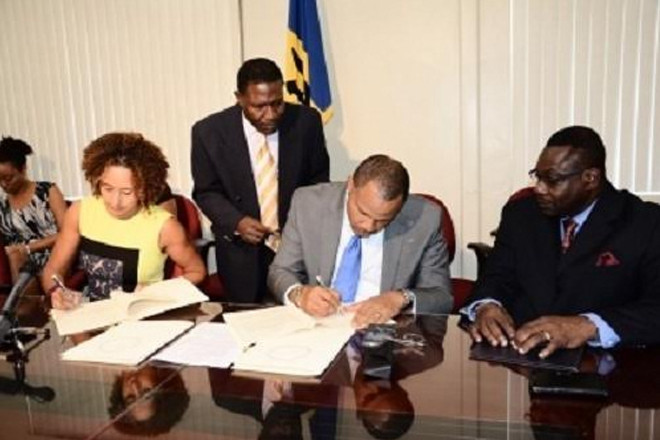 (Caribbean360) The Government of Barbados has signed two agreements with the Inter-American Development Bank (IDB) for a loan to help finance and execute a programme to strengthen human and social development.

Describing the project as “excellent and exceedingly important”, Minister of Finance and Economic Affairs, Christopher Sinckler, who signed the document along with Chief of Operations and Officer in Charge of the IDB in Barbados, Christel Saab, explained that it was aimed at strengthening and rationalizing Barbados’ Social Safety Net and Active Labour Market Policy.

“Government has, over the past five years, been intensifying its efforts at . . . mitigating the worse effects of the recessionary conditions so as to ensure that our levels of poverty do not rise beyond what we consider to be acceptable levels. We want to utilize skills and resources to bring people back into the mainstream of economic and social life of the country,” he said.

“Therefore, the programme’s objective is to contribute to the reduction of extreme poverty and unemployment in Barbados.”

The programme will be structured in three components, with the objectives being to reduce extreme poverty through the expansion and consolidation of the Identification Stabilisation Enablement and Empowerment (ISEE) Bridge Programme; decrease unemployment through enhanced employment services and demand-driven technical training; and create an efficient Management Information System that connects programmes executed by the Ministries of Social Care, Labour and related institutions, the minister added.

He added that the programme also aims to promote the social inclusion and accumulation of human capital among the extreme poor and vulnerable, while achieving their productive labour market insertion.

“It will also support and improve existing Government programmes targeted at different population groups. Component One will target extremely poor households, while Component Two will target unemployed persons, with an emphasis on vulnerable youth,” Sinckler pointed out.

It will be executed by the Ministry of Social Care, Constituency Empowerment and Community Development (MSCD), which will also be responsible for its overall financial management and implementation. The MSCD will collaborate with the Ministry of Labour, Social Security and Human Resource Development for the execution of the labour activities under this project.

Saab, who spoke on behalf of Country Representative for the IDB in Barbados Joel Branski, said it was the first time the organization would be working in the social sector in Barbados.

She said the IDB was committed to helping the most vulnerable in the country, not only by providing social assistance, but also opportunities for training and employment.