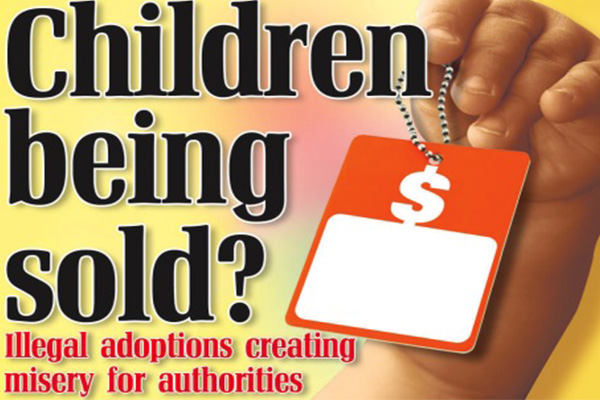 The Child Adoption Board has expressed fear that “current inefficiencies in the system may be promoting the persistence of private arrangements” where parents illegally “give away” their children for the prospect of a better life.

According to a report presented by the board and the Child Development Agency last week, there were 21 such cases presented to the board between January and August 2013.

The entities say that private adoptions, which are illegal in Jamaica, are the bane of their existence. According to the report, the agreement to “give away” the child may have been made when the woman was still pregnant and may have been facilitated by a third person who knew both parties and made a match between them. Sometimes nurses in hospitals are the matchmakers or sometimes a “friend of a friend”, the report said.

“We are aware that the current inefficiencies in the system may be promoting the persistence of the practice of private arrangements. A mother who genuinely wants to place her child for adoption might not have confidence in the system and may fear that her child will be lost in a child-care facility and not placed with a waiting family,” the report said.

However, the child-care officials are adamant that “any form of legal guardianship of a child by anyone other than the child’s biological parent must be mediated by the CDA and/or the Court, whether it is legal guardianship, foster care or adoption (in which case the CDA acts as the agent for the Adoption Board)”.

While there is the fear the monies might have been paid to the person/s who arrange for the parent/s and potential adopters to meet in some of these cases, Rosalee Gage Grey, director at the Child Development Agency, in an interview with the Jamaica Observer said unfortunately there is no solid proof.

She explained why such situations would not necessarily come to light.

“Based on how these arrangements go, that (monies being paid) would not necessarily come to us because of the interest of the parties because that would have been done outside of what we do. Because the adopter wants the child, they would not necessarily tell us because that would jeopardise them getting that child, so they are not going to come forward and say ‘Okay, I paid $100,000’,” she pointed out.

“The 21 cases referenced were where there were arrangements between parties who were not a relative of the biological parent and those arrangements, based on the circumstances presented to the board, could be alleged to have been arranged as per the definition in the Act.

“With adoptions in Jamaica there is no charge to it, so if monies should pass that would be illegal, no monies at all should pass,” Gage Grey insisted.

She said based on this awareness, the Adoption Board, through the CDA, has to do the due diligence to ensure that when an adoption is being contemplated, there is no money passed and that the parent giving up the child is well aware of the decision they are making and are not doing so under duress.

“We have to do the investigations to ensure that this is not the case, especially if they are younger mothers,” Gage Grey said, adding that those adoptions would not be approved by the Board.

“In those cases, further investigations have to be done to contact biological mothers and fathers and we would have to interview them to make sure they had willingly given up these children.

“We are saying the best interest of the child should be served at all times,” she told the Sunday Observer.

Meanwhile, last week at a press conference to announce that the Adoption Law is being reviewed, members of the Child Adoption Board and the Child Development Agency called for an end to illegal adoption practices in Jamaica.

Lisa Hanna, minister of youth and culture, speaking at the function said the “practice of facilitating the exchange of a child by a third party for money is not a new issue”. She added that “of all the types of adoptions that the CDA has identified, private adoptions pose the most problems”.

Gage Grey, speaking at the same press conference, emphasised that the CDA or the courts should mediate any matters pertaining to the legal guardianship of a child other than the child’s biological parents.

“There should be no exchange of money for adoption,” she stressed.