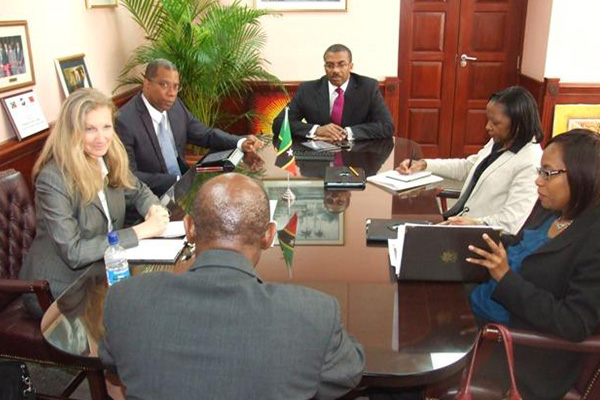 Basseterre, St. Kitts (CUOPM) – The Washington-based International Monetary Fund (IMF) is reporting real growth in the economy of St. Kitts and Nevis with increases in tourism and construction, employment and wages for the first half of 2013.

The statement, released at the end of a visit to the Federation and a Joint Cabinet Meeting with the Federal Government and the Nevis Island Administration, and attended by ECCB Governor Sir K. Dwight Venner and European Union officials on Friday, January 31, confirmed that St. Kitts and Nevis is moving in the right direction with full confidence with an estimated growth rate of 1.7 percent in 2013 and accelerated growth of 2.5 to 3 percent in 2014.

“There has been considerable progress under the authorities’ economic reform programme. After a four-year contraction of economic activity there were firm signs of a recovery in 2013,” said Mission Chief, Ms. Judith Gold, who lead the team during the January 20-31 visit to hold discussions on the 2014 Article IV Consultation and to conduct the seventh and eighth reviews under the three-year Stand-By Arrangement (SBA) arrangement.

The IMF said real Gross Domestic Product (GDP) is estimated to have grown by 1.7 percent with a pickup in tourism and construction, notwithstanding declines in the manufacturing and communications sectors.

“Employment also picked up, with number of total employees up by 10.2 percent and wages up by 5.1 percent in the first half of 2013. Inflation has remained low at 0.6 percent through end-October (y/y). Notwithstanding the challenges associated with the prolonged recession and the debt restructuring, the financial system has remained stable,” said Ms. Gold, noting that the “recovery in tourism receipts and strong increase in Citizenship by Investment (CBI) application fees contributed to a narrowing of the current account deficit from over 20 percent prior to 2011 to about 11-12 percent in 2012 and 2013.”

The IMF Mission Chief added that the improved current account, together with strong capital inflows has significantly strengthened the external position stating that “international reserves have increased since the start of the SBA from 5-months-of-imports to over 8 months at end-November 2013 (or 6 months excluding IMF disbursements).”

“The fiscal position has substantially improved, from a deficit of 7.8 percent of GDP in 2010 to a projected surplus of 8.6 percent in 2013. The stronger fiscal performance reflects policy efforts to contain expenditures, strengthen revenues, including the introduction of the Value Added Tax (VAT), interest cost savings from debt restructuring, as well as substantial CBI inflows. The improved fiscal situation allowed for the 13th month wage payment in September 2013 after a nominal wage freeze since 2010. Consequently, performance under the SBA remains broadly on track. The fiscal targets for end-June and end-September 2013 have been met, although there are delays in the implementation of structural reforms through end-2013,” said Ms. Gold.

“Growth in 2014 is expected to accelerate to 2.5-3 percent, with the continued recovery in tourism—supported by an increase in air lift capacity—and ongoing construction activity fueled by CBI related inflows and other Foreign Direct Investment (FDI) projects. Over the medium-term, the economy is expected to continue to recover and reach its potential growth rate of about 3-3.5 percent. After being subdued in 2013 and 2014, inflation is expected to pick up slightly, mirroring the recovery of domestic demand. The external position is projected to remain strong bolstered by tourism receipts, CBI inflows and other FDI,” said the IMF official.

She stated that continued fiscal discipline will be needed over the medium-term to achieve the authorities’ public debt target of 60 percent of GDP by 2020, pointing out that while CBI receipts could support a more expansionary fiscal stance, relying on these windfall flows for recurrent spending could lead to an unsustainable fiscal position in the future.

“Instead, the inflows provide a unique opportunity to build fiscal buffers, including to provide for humanitarian assistance and reconstruction after natural disasters, increase public investment in infrastructure stabilize the economy during downturns, and repay expensive debt. Moreover, careful management is needed to sustain the inflows, ensure that they contribute to increasing productive capacity and that they do not undermine the ‘St. Kitts and Nevis brand’,” said Ms. Gold.

She continued: “The mission and the authorities have reached staff-level agreement on the quantitative targets and on policies for the completion of the seventh and eighth review under the SBA. Discussions and understandings centered on policies to safeguard achievements so far and continue with the fiscal reform efforts. To support this goal, while boosting fiscal space for social and development spending, the authorities will continue to contain expenditures, including limiting new contingent liabilities, strengthening public financial management, and improving the oversight of government enterprises.”

The IMF Mission Chief added that the government will also continue with reforms strengthen tax administration, strengthening audit and enforcement process, and containing tax exemptions. The government also is committed to complete the debt restructuring. This staff-level agreement is subject to review by the management and Executive Board of the IMF”

The mission met separately with the Prime Minister of St. Kitts and Nevis, the Right Hon. Dr. Denzil L. Douglas; the Premier of Nevis, the Hon. Vance Amory; the Financial Secretary, Ms. Hilary Hazel, the Permanent Secretary of Finance in the Nevis Island Administration, Mr. Laurie Lawrence, other senior government, officials of the Eastern Caribbean Central Bank (ECCB), as well as representatives of the banking and business community.