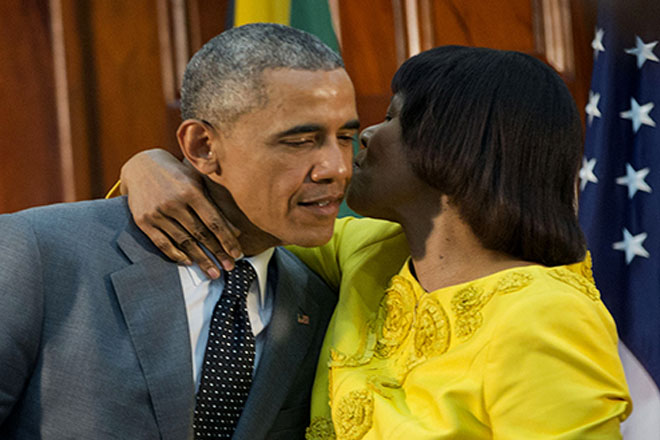 Kingston, Jamaica — A statement from the Office of the Prime Minister Wednesday said the recent visit to Jamaica by the United States President Barack Obama did not prompt impending regulatory action pertaining to unlicensable cable channels.

According to the statement, “There were no discussions on this matter during the visit at either the bilateral talks or the CARICOM-USA Meeting, nor was the matter raised at the Summit of the Americas in Panama.”

President Obama arrived in Jamaica on April 8 and left the island on April 9.

See the statement in full below:

The Office of the Prime Minister wishes to clarify assertions made in the media about impending regulatory action pertaining to unlicensable cable channels.

The impression has been given that recent actions were prompted by discussions during the visit of the President of the United States of America, on April 8 and 9, 2015 and an escalation in a trade issue internationally. This is inaccurate. There were no discussions on this matter during the visit at either the Bilateral Talks or the CARICOM-USA Meeting, nor was the matter raised at the Summit of the Americas in Panama.

Over the years, Jamaican and other cable distributors have sought negotiated licences to show channels originating in the USA. Only two rights holders in recent times have taken steps to license their programming in Jamaica. The majority of rights holders have been reluctant to negotiate such authorizations.

The Government of Jamaica recognizes this matter to be a trade issue and is working toward a resolution through continued dialogue with the United States Trade Representative and other interested stakeholders in the USA, as well as through regional efforts within the Council for Trade and Economic Development (COTED) of the Caribbean Community (CARICOM). This has led to a proposal for a meeting to be held as soon as possible, between United States rights holders and regional cable operators.

The OPM is actively engaged with the Industry, the Broadcasting Commission, the Ministry of Foreign Affairs and Foreign Trade and the Attorney General’s Chambers.

Importantly, it must be noted that local cable operators have been working with the Broadcasting Commission, particularly over the last six months, to move towards compliance.

The Industry, the Commission and the OPM are aware of some of the complex challenges being faced and there is a clear commitment to achieve compliance in a manner that does not lead to instability in the sector. The issue remains the subject of collaborative, on-going work at the Bilateral and now the regional levels with the United States Government. Negotiations at the regional level are expected to commence shortly.

Jamaica is maintaining an open door policy to rights holders to discuss Intellectual Property related concerns of mutual interest. It must be noted that the USA has acknowledged the effort being made by Jamaica to address the cable issue as well as progress made in copyright.