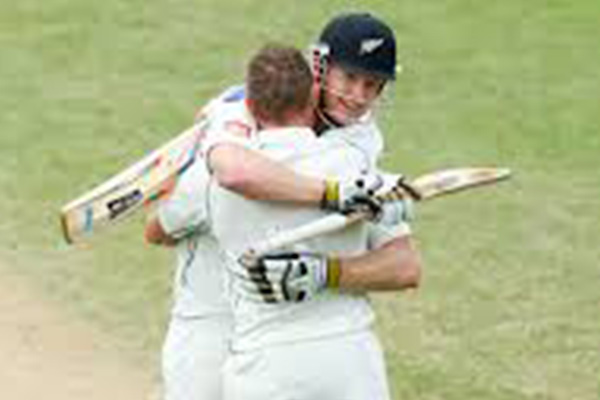 India hangs on for a draw after McCullum triple

Brendon McCullum brought the whole of New Zealand to its feet in becoming the first New Zealander to 300 runs, New Zealand then possibly indulged for about half an hour after having fought hard for close to two days, following which Virat Kohli scored a century to make sure India didn’t lose the Test they would have thought they had won two days ago. New Zealand won the series 1-0, and India ended their second successive tour without a win.

Given 67 overs to survive, India were in strife and would have lost their third wicket in the 13th over had Kohli walked or even shown signs of guilt after edging one through to BJ Watling, but he showed those niceties were not for him when there was a Test to be saved.

For about 46 minutes in the morning, the New Zealand economy came down to a standstill, the GDP took a beating and Basin Reserve cheered every single on as McCullum became the first New Zealander in 84 years of their Test cricket to register a triple-century. What made it sweeter was that he had come out in the first session of day three with an innings defeat and a squandered series lead imminent. By the fifth morning, though, the match had been saved, McCullum was 281, and it was time for a little indulgence, a phase of play where he would bask in the applause.

Before McCullum could get there, though, his partner Jimmy Neesham became only the seventh man to score a century on debut from No. 8. He had played a vital part previous evening in keeping McCullum together as his body and his concentration threatened to disintegrate after close to five sessions of intense grind. Neesham took all the pressure off by taking a majority of strike and the responsibility of run-getting.