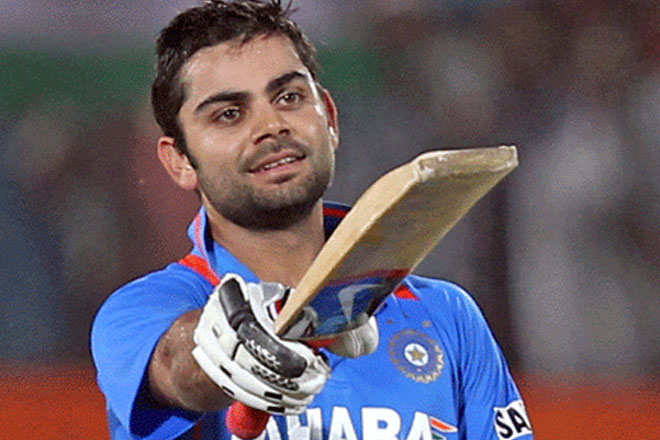 (ESPN Cricinfo) – Virat Kohli scored his first ODI century against South Africa and first in 14 innings since the World Cup to anchor an authoritative Indian batting performance. Although they did not reach 300, this was their highest score of the series so far, and their spinners made sure it was enough.

On a slow surface which took turn, the slow men burrowed their way into South Africa’s middle order, taking 32 for 3 between the 10th and 20th over, to blunt the challenge even with AB de Villiers still at the crease. The captain did his bit with a heroic hundred and a share in the highest stand of South African innings, 56 for the fifth-wicket alongside Farhaan Behardien, but by then it was too late.

Virat Kohli scored his first ODI century against South Africa and first in 14 innings since the World Cup to anchor an authoritative Indian batting performance, which saw them post their highest score of the series so far. Kohli starred in two century stands – the first with Ajinkya Rahane and the second with Suresh Raina, who scored a much-needed half-century after back-to-back ducks – to put India in a promising position to square the series.

But their bowlers will be wary of suffering the same fate as South Africa’s six-man attack whose seamers erred with overuse of the short ball and whose slower bowlers were ineffective despite the pace of the surface. They missed Morne Morkel – who was out with an quad injury and could have generated awkward bounce – especially early on when there was some lift on offer, and his replacement, Chris Morris, ended up being the most expensive of the South African seamers. But they will be satisfied with the way they pulled it back in the end.

It did not always look as though South Africa, or Morris, would toil that hard. He had opener Rohit Sharma caught at midwicket early, after he tried to flick a ball over the leg side. By then, South Africa had already had a hint that the short ball was not going to work as well as it has at other venues in the series. Rohit had pulled powerfully but when he was dismissed, South Africa thought they could default to their stock ball again.

Kagiso Rabada and Morris continued with a barrage and kept Shikhar Dhawan and Virat Kohli quiet. They gave away just 7 off the next 18 balls runs and Dhawan had had enough. He tried to pull a short ball on the leg side but only got the ball to pop up and Quinton de Kock took a good catch, diving full stretch to his right, to reduce India to 35 for 2.

Sensing that they could force their way into the middle order, AB de Villiers brought Dale Steyn back but his second spell ended off-colour, when he conceded 12 runs in an over and allowed both Kohli and Rahane to settle.

Kohli looked in particularly good touch, after finding form in Rajkot, timed and placed the ball well and showed urgency in running between the wickets. Aaron Phangiso and Imran Tahir were always going to struggle to keep him quiet. He found gaps and the boundary, and had raced to a 51-ball fifty with a stolen single for which he had to put in a dive to complete.

Morris bowled both sides of the wicket without success. Rabada’s short ball did not bring reward. It was only when Steyn returned in the 27th over that South Africa broke through: Rahane was allowed some width and Rahane flashed without moving his feet. The ball kept low and took the bottom edge on its way through to de Kock, who took it low down with both hands.

MS Dhoni did not promote himself above the under-fire Raina, who had the situation and the space to play himself back into form. He took his time sussing out conditions and South Africa took the opportunity to squeeze. They gave away only one boundary in seven overs to pull things back, but the respite was only temporary.

Kohli’s slow-burn was ready to burst into flames. He brought up his century with a six off Phangiso, smacking the ball over Steyn’s head at long-on and putting a total in excess of 300 in India’s sights. Raina had his eye in by then and began catching up. After taking 12 runs off 16 balls, he scored his next 38 runs off 34 balls and reached his half-century off 48. He was particularly severe on the full ball, while Kohli punished the spin.

But Raina fell on his sword when he pulled Steyn to midwicket on the eve of the last five overs, which allowed South Africa to pull India back. Kohli was struggling with cramp, and battled to get Rabada away at the end and was caught behind. Rabada found himself on a hat-trick when Harbhajan Singh was bowled down the legside off the next ball – one that might have been called a no-ball on a different day – and Steyn was on the mark as well when he took wickets with the last two balls of the match. In the last five overs, South Africa took five wickets to underline their new-found ability to dominate at the death.