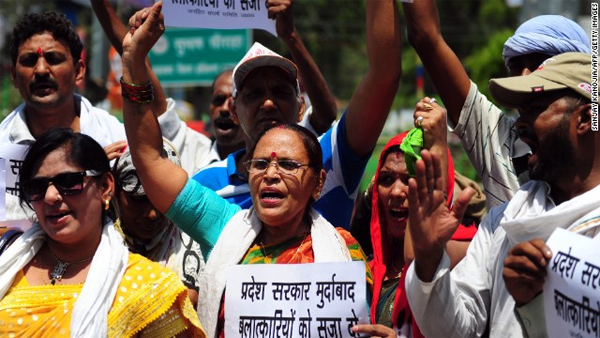 (CNN) — Forensic tests on a woman found hanging from a tree in the Indian state of Uttar Pradesh have so far failed to find evidence of rape, a local police chief said.

More tests are being done, amid claims from the woman’s family that she was gang-raped and murdered by five men, including her brother-in-law.

The alleged attack comes just weeks after the bodies of two cousins, aged 14 and 15, were founding hanging from a mango tree in the Budaun district of the same state. Of the five suspects arrested, police say three have confessed to the rape, but not murder.

In the latest case, the 42-year-old woman was found hanging from a tree in the Bahraich district.

“We are not commenting how it all happened until our investigation is complete,” Guptan told CNN.

Calls for strong political action to change attitudes and stop rape in India have grown louder since December 2012, when a student was gang-raped and murdered by attackers on a moving bus.

The 23-year-old’s horrific injuries made headlines and started a national debate about how many rapes were happening and why.

In his first address to parliament as Indian Prime Minister, Narendra Modi addressed the issue on Wednesday, warning lawmakers against “politicizing rape.”

“I appeal to our political leaders that we should not carry out psychological analysis of rape … Is it correct to make a statement always? Why can’t we just keep quiet. Respect and security for women should be the topmost priority of the entire people,” he said.

His comments came after observers seized on statements made by Babulal Gaur, the home minister of Madhya Pradesh, that rape was a “social crime” — “sometimes it’s right, sometimes it’s wrong.”

Other politicians were also accused of trivializing the crime with comments including an observation that rapes “happen accidentally,”while another suggested “boys make mistakes.”

In a veiled reference to those comments last week, United Nations Secretary-General Ban Ki-moon said: “We say no to the dismissive, destructive attitude of ‘boys will be boys’. Together, we can empower more people to understand that violence against women degrades us all.”

Ban made the comments while launching a video campaign on ending sexual violence through gender equality.