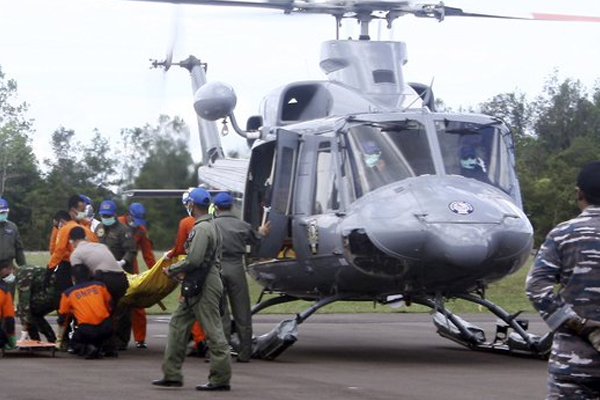 Divers struggled with strong currents and poor visibility in an attempt to lift the fuselage and what appears to be the plane’s cockpit from the seabed at a depth of 30 meters (100 feet).

So far, 59 bodies have been recovered from AirAsia Flight 8501, which plunged into the Java Sea with 162 people on board while en route from Surabaya, Indonesia’s second-largest city, to Singapore. Officials believe the rest are still inside the main fuselage.

Transport Minister Ignasius Jonan told Parliament earlier this week that radar data showed that the plane was climbing at an abnormally high rate — about 6,000 feet a minute — then dropped rapidly and disappeared. He did not say what caused the plane to climb so rapidly, but the pilots had asked to climb from 32,000 feet to 38,000 feet to avoid threatening clouds and were denied permission because of heavy air traffic. No distress signal was received.

An excessively rapid ascent is likely to cause an airplane to go into an aerodynamic stall. In 2009, an Air France Airbus A330 disappeared over the Atlantic Ocean in bad weather while flying from Rio de Janeiro to Paris. Investigators determined from the jet’s black boxes that it began a steep climb and then went into a stall from which the pilots were unable to recover.

Airbus spokesman Justin Dubon said it was too early to comment on possible similarities between the two crashes.

A preliminary report on the AirAsia accident is expected to be submitted to the International Civil Aviation Organization next week, in line with a requirement that it be filed within 30 days of a crash, Kurniadi said, adding that a full analysis of what went wrong with the plane could take up to a year.