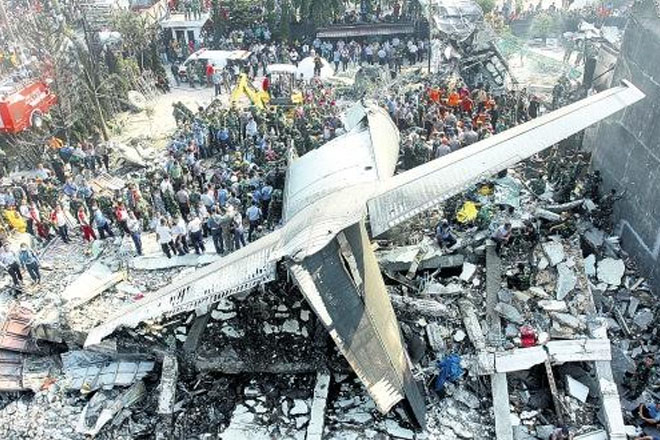 Medan, Indonesia (AFP) — The number of people killed when an Indonesian air force plane crashed into a residential neighbourhood rose to 142 on Wednesday, as families said their relatives had paid to be on the aircraft, in violation of military rules.

Witnesses described scenes of horror when the Hercules C-130 transport plane crashed into the city of Medan and exploded in a fireball Tuesday, shortly after taking off from a nearby airbase.

Buildings were severely damaged, cars reduced to flaming wrecks and the plane itself was almost completely destroyed, with the mangled tail the only part of the 51-year-old aircraft still recognisable after the disaster.

The recovery operation officially ended late Wednesday with all the parts of the plane cleared from the site, air force chief Agus Supriatna said. A small group of military personnel would remain in the area to check for more bodies, he added.

Many of those on board the flight, which was carrying 122 people, were believed to be servicemen and women and their families.

But the air force has repeatedly revised the number of people on the plane upwards – it initially indicated there were only 12 crew – raising questions whether paying civilian passengers had been allowed on board, leading to the plane becoming overloaded.

“We paid one million rupiah ($75) per person,” said Janson Halomoan Sinaga, who lost five relatives who were heading to the remote Natuna Islands, adding they were “not a military family”.

Some relatives of military family members also said they paid to travel on the flight. While the armed forces allows relatives of service members to hitch lifts on planes, any sort of payment is against the rules.

Supriatna denied the allegations of payments and vowed an investigation.

As more bodies were pulled from the rubble and taken to hospital, police put the total death toll at 142, indicating a growing number of fatalities on the ground. So far 62 victims, mostly military personnel, have been identified.