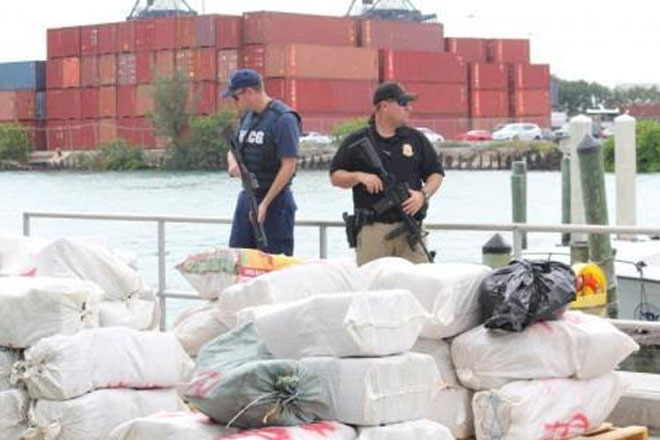 Miami, USA — US Customs and Border Protection (CBP) Air and Marine Operations aircrews, working jointly with the US Coast Guard, have intercepted a drug-trafficking vessel loaded with more than 2,645 pounds of cocaine in the Caribbean Sea. The estimated street value of the drugs is tens of millions of dollars.

US Coast Guard personnel responded and intercepted the vessel after smugglers initially attempted to evade capture. Law enforcement discovered dozens of wrapped packages under a blue tarp onboard containing more than a ton of cocaine and arrested three individuals on the vessel.

“This recent maritime interdiction serves as a perfect example of the unified effort between US Customs and Border Protection, Air and Marine Operations and the US Coast Guard in disrupting the flow of narcotics destined for the United States while focusing its efforts on dismantling transnational criminal organizations,” said Southeast Region Air and Marine Operations Deputy Director Jesse Wozniak. “We greatly value our partnerships and will continue to apply advanced aeronautical and maritime capabilities to counter smuggling threats in the region.”

With more than 2,000 miles of border, the sheer amount of area covered in the Southeast Region makes aircraft coupled with surface interdiction assets and ground agents a force multiplier to effectively counter all threats. Threats include combined aerial and maritime smuggling effort originating from the Yucatan and the Caribbean islands, such as Jamaica and Hispaniola, proceeding to islands in the southern Bahamas and Florida’s western coast that moves the contraband to the United States.

CBP Air and Marine Operations have been an integral part of the successful counter-narcotic missions supporting Operation Martillo in coordination with the Joint Interagency Task Force – South. The national task force oversees the detection and monitoring of illicit traffickers and assists US and multi-national law enforcement agencies with the interdiction of maritime drug traffickers.

Operation Martillo is one component in the United States government’s whole-of-government approach to countering the use of the Central American littorals as transshipment routes for illicit drugs, weapons, and cash. Operation Martillo is an international operation focused on sharing information and bringing together air, land, and maritime assets from the US Department of Defense, the Department of Homeland Security, and Western Hemisphere and European partner nation agencies to counter illicit trafficking.