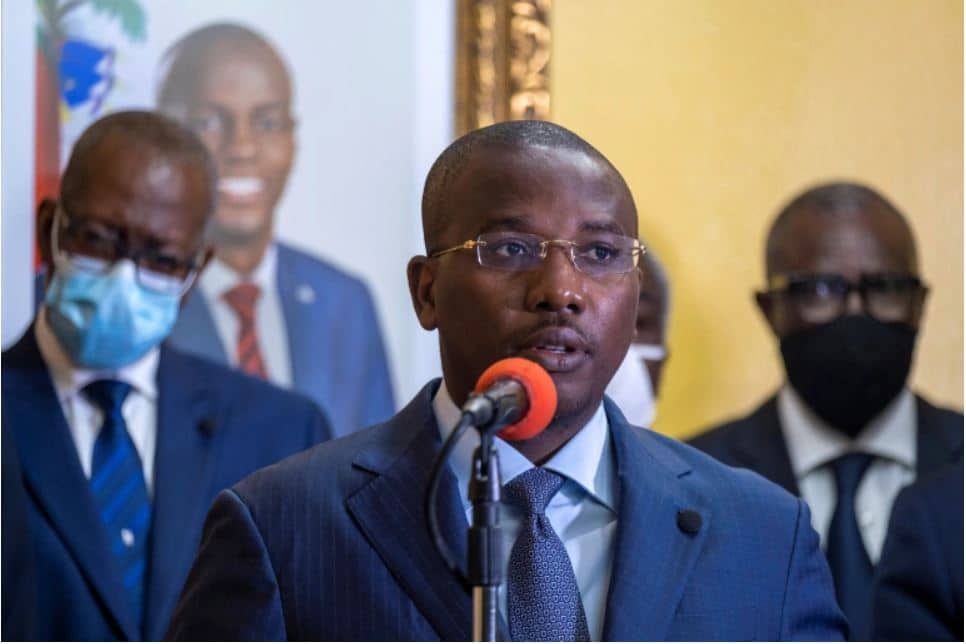 Haiti’s acting Prime Minister Claude Joseph, whose leadership of the nation has been disputed since the July 7 assassination of President Jovenel Moise, told the Washington Post newspaper Monday he will cede power.

Ariel Henry, who was appointed as prime minister by Moise two days before the assassination and who was recently recognised as the “designated prime minister” by the international community, will take over.

Joseph, who served as foreign minister under Moise and was serving as acting prime minister before Henry’s appointment, had to date refused to recognise Henry as the designated prime minister, arguing that Henry had not been sworn in at the time of Moise’s killing.

Joseph told the Washington Post that he and Henry had met privately over the past week, adding that he agreed to step down on Sunday “for the good of the nation”.

“Everyone who knows me knows that I am not interested in this battle, or in any kind of power grab,” Joseph said.

“The president was a friend to me. I am just interested in seeing justice for him,” Joseph added.

It is not immediately clear how quickly Joseph would step down, however.

“Negotiations are still in course,” Haiti Elections Minister Mathias Pierre said, according to the Associated Press, adding that Joseph would go back to being the minister of foreign affairs.

The change follows a statement Saturday from a key group of international diplomats that appeared to snub Joseph as it called for the creation of “a consensual and inclusive government”.

“To this end, it strongly encourages the designated Prime Minister Ariel Henry to continue the mission entrusted to him to form such a government,” the statement from the Core Group said.

The Core Group is composed of ambassadors from Germany, Brazil, Canada, Spain, the US, France, the European Union and representatives from the United Nations and the Organization of American States.

The statement was issued hours after Moise’s wife, Martine, arrived in Haiti on Saturday on board a private jet clad in black and wearing a bulletproof vest. She has not issued a statement or spoken publicly since her return to Haiti as the government prepares for the July 23 funeral that will be held in the northern city of Cap-Haitien. Other events to honor Moïse are planned this week in the capital of Port-au-Prince ahead of the funeral.

Monique Clesca, a Haitian writer, activist and former UN official, told the Associated Press she doesn’t anticipate any changes under Henry, whom she expects to carry on Moise’s legacy. But she warned Henry might be viewed as tainted because of the Core Group”s involvement.

“If he accepts this, there is not only a perception, but the reality that he has been put there by the international community, and I think that’s his burden to carry,” she said.

“What we’re calling for is for Haitians to really say this is unacceptable. We do not want the international community stating who ought to be in power and what ought to be done. It is up to us.”

Moise, 53, was fatally shot when assassins armed with assault rifles stormed his private residence in the hills above Port-au-Prince on July 7.

Colombia’s police chief, General Jorge Vargas, said an investigation by Haitian and Colombian authorities, alongside Interpol, found that Badio had ordered former Colombian soldiers Duberney Capador and German Rivera – who had initially been contracted to carry out security services – to kill Moise.

Capador was killed in a shoot-out with Haitian police hours after Moise was slain. Rivera remains detained in Haiti while police are still searching for Badio, who previously worked for Haiti’s justice ministry and then the government’s anti-corruption unit until he was fired in May.

More than 20 suspects accused of direct involvement in the slaying have been arrested, the majority of them former Colombian soldiers. At least three other suspects were killed, and police have said they are still looking for at least seven others.

The assassination has pitched the already troubled nation into chaos, coming amid a surge in gang violence that has displaced thousands of people and hampered economic activity in the poorest country in the Americas.