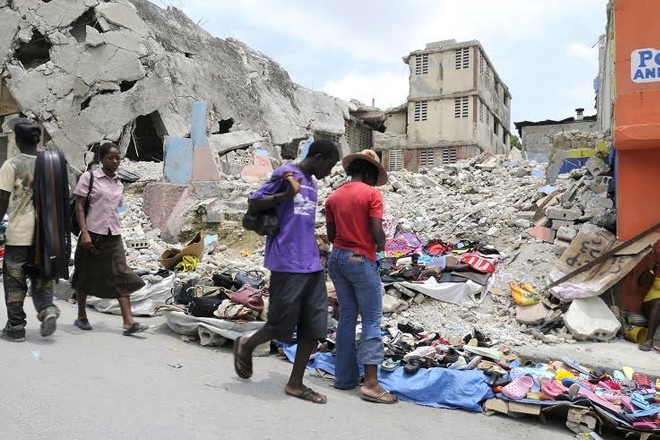 (Caribbean360) Haiti is today marking the sixth anniversary of the deadly earthquake that claimed hundreds of thousands of lives, with United Nations Secretary General Ban Ki-moon calling on the international community not to stop helping the country as it still has a long way to go.

On January 12, 2010, more than 200,000 people were killed when a magnitude 7.0 earthquake struck the south of the nation that shares the island of Hispaniola with the Dominican Republic. Haiti’s capital, a densely populated city located about 15 miles from the quake’s epicenter, suffered widespread devastation.

“United and in solidarity with all Haitians who have lost loved ones to this catastrophe, we honour the memory of our colleagues,” Ban said in a statement issued yesterday, ahead of today’s anniversary.

“The path to recovery and long-term development is not an easy one. Many Haitians continue to face multiple challenges, including displacement, food insecurity and lack of access to clean water and sanitation. Haiti remains in need of international support and I therefore call on the international community to stand with Haiti as it moves forward to rebuild.”

“Let me reaffirm the continued commitment of the United Nations to support the Haitian people in the fulfilment of their aspirations,” he added.

The UN chief said even as the victims of the quake are honoured, the commemoration of the tragedy must be a source of renewed inspiration and a call to unite behind a vision for a stable, democratic and prosperous future for Haiti.

In addition to the deaths, the earthquake left 300,000 injured, 1.5 million displaced, and billions of dollars in damage.