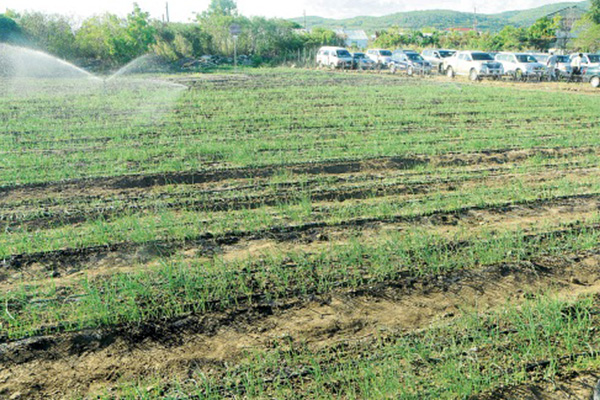 Farmers at the Yallahs Agro-Park in St Thomas now have the benefit of a $395-million irrigation system which, it is hoped, will assist in boosting onion production.

The system has been jointly funded by the Inter-American Development Bank (IDB) and the Government.

In addition to this irrigation facility, the Government, with the support of the IDB through the agriculture competitiveness programme, will invest another $46 million to install farm roads and drainage and construct a packaging house in the parish.

The Yallahs Agro-Park has started production in earnest with 22 acres of onions under production.

Prime Minister Portia Simpson Miller, in addressing the official ceremony in St Thomas recently to commission the irrigation system and to launch the agro-park, said these facilities are intended to foster a more commercial approach to agriculture utilising best practices.

According to Simpson Miller, the agro-park concept is intended to comprehensively address all the gaps along the entire agriculture value chain.

“Government’s role in this thrust is to provide, where possible, lands with the requisite infrastructure and this includes irrigation, roads, drainage and post-harvest facilities,” Simpson Miller said.

The Government, she noted, also facilitates contracts between farmers and end-users. However, farmers are the ones who must produce and sell their crops and livestock; and must therefore bring working capital and expertise. Simpson Miller said the Government has spent well over $3 billion to install modern irrigation facilities in support of sustainable agricultural production in Jamaica.

She noted that in 1998 when the NIDP was developed, there was a consciousness that irrigation must play a critical role in lifting agricultural production and productivity.

Simpson Miller said the six projects implemented so far under the NIDP have collectively brought 2,000 hectares under production.

“The recipients of public irrigation are no longer predominantly cane farmers in the southern belt, but also from areas where our small domestic food crop farmers operate,” the prime minister said.

She asserted that the agro-parks are here to stay, as they represent a major plank of the Government’s growth strategy and are intended to foster a more commercial approach to agriculture, utilising best practices.

“The Government also facilitates contracts between farmers and end-users. It is the farmers, however, who must produce and sell their crops and livestock. Farmers must therefore bring their working capital and their expertise,” she added.

Simpson Miller emphasised that the Government is proceeding “full speed ahead” with the agro-park programme, which will eventually put 8,000 acres into sustainable farming.

She acknowledged the contributions of the many small farmers, noting that through their efforts, in the September to December quarter of 2013 the domestic food crop sector grew by 14 per cent, compared to the corresponding quarter of 2012.

Agriculture Minister Roger Clarke said this irrigation system will bring improvements to the communities in and around Yallahs and will touch the lives of the many farmers and farm families who reside and work in this area.

The proper management of water resources, he said, is an essential component in achieving increased production levels.

“The resolve of the Ministry of Agriculture and Fisheries is to position our sector to achieve higher levels of growth and productivity,” he said, adding “our objective is to increase the production and productivity of you, the existing farmers here at Yallahs, through the engagement of best practices and to link you to markets.”

“The objective of this was to achieve efficient allocation of the country’s irrigation water resources through investment in infrastructure while strengthening the capacity of the NIC,” he said.

According to Arzu, the IDB recognises the importance of maintaining food security.

“History teaches us that one of the most effective ways to pull people and nations out of poverty is to invest in agriculture,” he said.

The Yallahs Agro-Park, he said, demonstrates the progress that is being made towards realising the important goals of not only food security but a reduction in the country’s import bill

as well as an increase in export production through improved competitiveness.

Member of Parliament for West St Thomas James Robertson said the parish is very appreciative of the agro-parks and grateful to the IDB for its support.

“I remember when they came to witness the funding of this project. We really appreciate it because it is going to make a difference. From the hills to the sea, the Yallahs Valley says thank you to all who have been involved,” Robertson said.