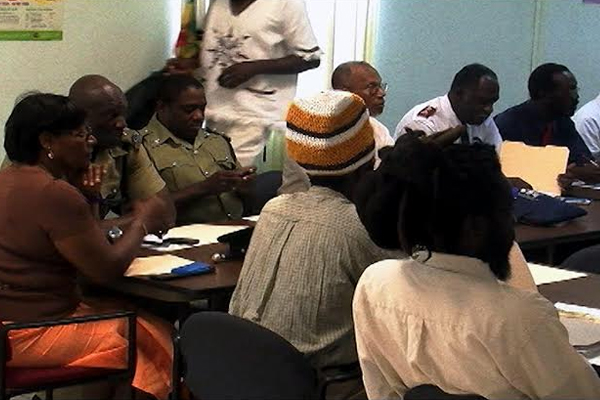 Is it time to decriminalize marijuana?

ZIZ News — On Monday, the National Council on Drug Abuse Prevention hosted a national discussion on the decriminalization of marijuana in St. Kitts and Nevis.

The discussion on decriminalizing marijuana brought together a wide cross section on stakeholders including members of the Royal St Christopher and Nevis Police, the faith based community, the Rastafarian community, medical practitioners and representatives from different government ministries.

The Hon Patrice Nisbett, minister responsible for homeland security under which the National Council on Drug Abuse Prevention falls, says he’s hoping the national discussion could spark further debate as to whether or not our society is ready for the decriminalization of marijuana.

“Whether people feel in our society at this particular point in time that it is an appropriate time for us to seriously look at the issue as to whether we could decriminalize or legalize small portions or small quantities of marijuana; whether for medical use or whether for personal use,” he said.

Member of the Rastafari Nyabinghi Theocracy Order, Ras Dabo Penny described the discussion as a step in the right direction.

“For over three decades, four decades the rastaman has been advocating for the free use and the equal use of marijuana and I think today is an educational process that has to continue down the line. But yes we must commend the government and the authorities for taking a step and opening the discussions,”

Director of Community Development, Azilla Clarke noted that it is critically important to first prepare the communities for which ever direction the authorities chose.

“We also have to make determination as to what populations cannot answer for themselves so we have to protect them; the adolescents, children under 18,” she said. “We already have a problem in St. Kitts-Nevis about regulating personal choice. Everybody wants to eat what they want to eat, drink what they want to drink, have as much sex as they want to have sex and not live with the consequences and therefore we have some social structures — some cultural and social structures to put in place in order to prepare ourselves for which ever eventuality we choose.”

Assistant Commissioner of Police Robert Liburd added that he would be partially in support of decriminalizing marijuana only for medical purposes.

“I do not support legalization…and decriminalization, partially — just partially. Partially in the sense that if there is medical usage in the marijuana then i thought that more studies need to be done on it,” he said.

The faith-based community on the other hand expressed reservations against decriminalizing marijuana. Archdeacon Valentine Hodge says the church would be reluctant to give its approval.

“I think there’s a distinction between decriminalizing and legalizing. I think decriminalizing would be the easier one; it’s sort of the first choice for most persons because then of course people would not be incriminated, they would not be charged and so on for possession. Legalizing is a much larger situation. I don’t think as a Christian community we would even go for the decriminalization because of the impact it can have on our society,” he said.

Minister Nisbett added that the recommendations and findings coming out of Tuesday’s discussions will be used to guide further policies and legislations surrounding the use of marijuana.