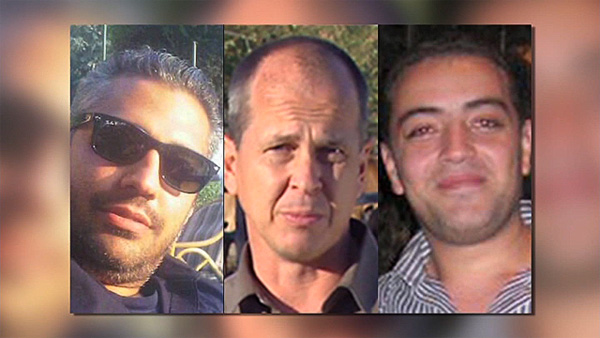 (CNN) — Three Al Jazeera English journalists were convicted Monday of aiding the Muslim Brotherhood in a ruling that immediately outraged journalists and activists around the world.

The journalists, Peter Greste, Mohamed Fahmy and Baher Mohamed, have been imprisoned in Cairo since December on charges that include conspiring with the Brotherhood, spreading false news and endangering national security.

The three men have steadfastly denied the charges, as has Al Jazeera.

In a tense courtroom on Monday, a judge sentenced Greste and Fahmy to seven years in prison while Mohamed was handed down 10 years — seven for one charge, three for a second.

Several other Al Jazeera journalists who were tried in absentia received 10-year sentences as well.

In an interview on Al Jazeera shortly after the verdicts were read, Amnesty International director Steve Crawshaw deplored what he called an “outrageous ruling” and called it an “absolute affront to justice.”

“I don’t think it has anything to do with justice,” he said, calling it another step in Egypt’s “campaign of terrorizing people and terrorizing the media.”

Al Jazeera English managing director Al Anstey said in a statement that the sentencing “defies logic, sense, and any semblance of justice.”

“There is only one sensible outcome now,” Anstey added. “For the verdict to be overturned, and justice to be recognized by Egypt. We must keep our voice loud to call for an end to their detention.”

CNN correspondent Ian Lee, stationed outside the court in Cairo, said that through an appeals process, “there’s a high likelihood that a judge could either reduce the sentence or acquit them later on.”

(Because Al Jazeera has no staff operating in Egypt, CNN and other international broadcasters have been contributing reporting to its television coverage.)

Pawns in a geopolitical dispute

The prosecution, which has argued channels like Al Jazeera brought down Iraq and were planning to do the same in Egypt, has been widely condemned by international correspondents, press organizations and foreign governments.

Amnesty International has asserted that Greste, Fahmy and Mohamed are pawns in a geopolitical dispute between Egypt and Qatar, the tiny Middle Eastern country that finances Al Jazeera. Qatar has long been perceived as a supporter of the Muslim Brotherhood, a religious and political group banned in Egypt and labeled a terrorist organization after President Mohamed Morsy’s ouster last year.

That declaration came just days before the Al Jazeera journalists were arrested at the Cairo hotel where they were working. Egyptian state-run media said they were charged with “broadcasting false information” to harm the country’s national security and being members of an illegal organization, the Muslim Brotherhood.

A number of other defendants, with no affiliation to Al Jazeera, were also convicted Monday of similar charges.

Throughout the trial, the prosecutors were criticized for presenting evidence that was “fabricated,” as Greste has asserted, or irrelevant to the case, like videos of Greste’s old news reports from other countries.

Greste, Fahmy and Mohamed were working for Al Jazeera’s English-language news channel when they were detained. Greste, a correspondent, previously worked for CNN, Reuters and the BBC, while Fahmy, the channel’s bureau chief in Cairo, has also worked for CNN.

“Mohammed, Baher, and Peter are first class journalists,” Al Jazeera English managing director Al Anstey said in a statement after they’d been detained for three months. “They were just doing their job covering and challenging all sides of the story in Egypt.”

In an interview for CNN’s “Reliable Sources,” Greste’s parents, Juris and Lois, said they could not understand why Peter was still behind bars.

“Peter had no reason, no motive for doing anything like the allegations against him,” Lois Greste said. “He would have reported the same story, be it for CNN, BBC, Reuters or anybody else.”

Juris Greste said it was not unreasonable to characterize his son as a “political prisoner.”

“It looks like a kidnapping by the state, as it were,” he said, even as he emphasized that he and his wife “bear no ill will against Egypt or its people.”

While Kerry did not elaborate on the outcome, he said generally that they “discussed the essential role of a vibrant civil society, a free press, and rule of law, and due process in a democracy.”

There are 167 journalists imprisoned around the world, including the three Al Jazeera journalists sentenced Monday, according to Reporters Without Borders.

China has the largest number of journalists behind bars, with 32, followed by Eritrea (28) and Syria (16), the press freedom organization says.

Twenty eight journalists have been killed doing their jobs this year, the group says.

Reporters without Borders ranks Egypt 159 out of 180 countries for press freedom.