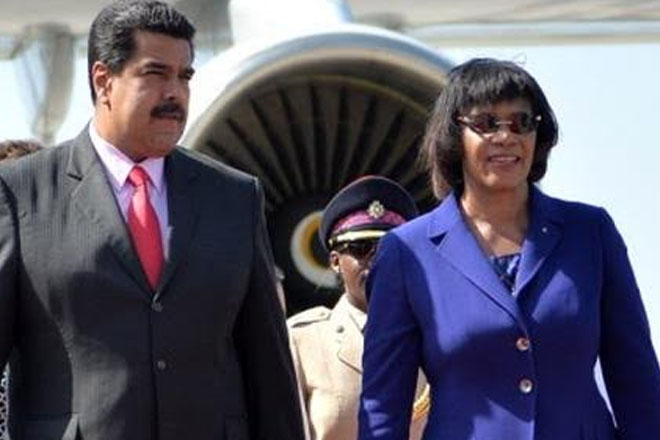 Kingston, Jamaica — Regional leaders arrived in Montego Bay, Jamaica, for the tenth PetroCaribe summit, which was due to take place on Saturday and Sunday.

Launched in 2005, the PetroCaribe agreement allows its member countries — currently totaling 19, including Venezuela — to purchase oil from Venezuela on preferential terms. Member countries need only pay 60 percent of the cost of oil up-front, and the remaining 40 percent can be paid over a period of 25 years at an interest rate of 1 percent.

Additionally, PetroCaribe has also established the ALBA Caribe Fund, which finances development projects in member states and thus far a total of US$106 million has been disbursed to fund 69 social welfare projects. An agreement was signed last month August with St Kitts and Nevis for the installation of solar panels in public schools, and also housing and habitat programs.

On Friday, St Kitts and Nevis Prime Minister Dr Timothy Harris, along with representatives of the St Kitts-Nevis Development Bank, PDVSA St Kitts and the government of Venezuela, signed documents to signal the beginning of the Fresh Start Programme, through which local entrepreneurs can start small businesses.

“This particular arrangement called the Fresh Start Project is intended to provide a fresh start to young and not so young entrepreneurs who are finding it difficult to access financing from the commercial financial enterprises,” Harris said.

“The PetroCaribe agreement and the ALBA Caribe Fund arrangements are not just about trading in oil, as they facilitate the cultural, social and economic development of St Kitts and Nevis,” added minister with responsibility for energy, Ian “Patches” Liburd.

Jamaican Prime Minister Portia Simpson Miller underscored the significant impact the PetroCaribe agreement has had on the economic independence of countries of the Caribbean region.

In a statement at the plenary session of the summit on Saturday, Simpson Miller hailed the pact as a lifeline for many of the region’s struggling economies and peoples.

She said the summit marks another opportunity for Latin American and Caribbean countries jointly to recognize the achievements and the importance of the accord, which has significantly helped to fortify regional economies, meet many of the social and economic development needs of the people of the region, and build strong relationships.

“Since that historic signing, the region has seen significant benefits and increased development in many areas. Additionally, PetroCaribe has engendered a sense of independence in our region,” Simpson Miller stated.

The 19 member countries in the region that make up PetroCaribe were all expected to attend the summit.