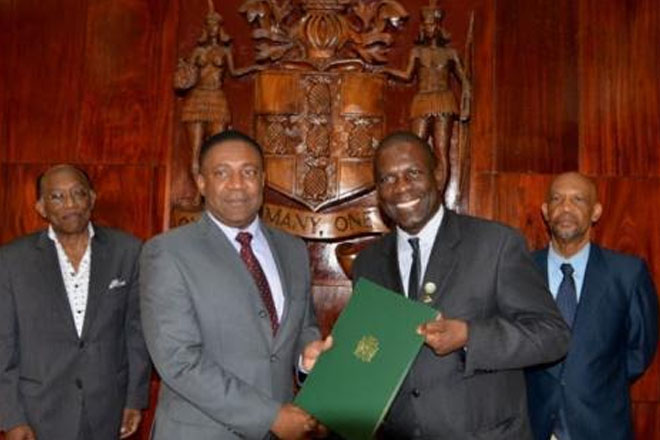 Kingston, Jamaica (JIS) — Minister of science, technology, energy and mining, Phillip Paulwell, says Jamaica is positioning itself to derive tremendous economic and social benefits from the global nutraceutical industry, which is valued at over $150 billion.

“Within our hemisphere, Brazil is one of the major providers of raw materials for the industry (and) these raw materials include oils, algae and herbs – one of which is the rosemary herb – which is grown extensively in Jamaica. This industry is one that has the potential to become a major player in Jamaica, we fervently believe so,” he said.

The minister further noted that the country has over 50 percent of established medicinal plants worldwide, “therefore the herbal business is a significant potential earner of foreign exchange.”

Paulwell was speaking at the official signing of a memorandum of understanding (MoU) between the Jamaica 4-H Clubs and the National Commission on Science and Technology (NCST) on Tuesday.

The three-year agreement is aimed at enhancing agricultural production as well as capitalising on opportunities available in the dynamic nutraceutical industry.

“This sector is steaming with opportunities for large, small, medium and micro enterprises. In 2011, the global industry was valued at over $150 billion and it’s expected to reach well over $200 billion by next year,” the minister said.

Paulwell pointed out that some of the factors that have been contributing to this increased demand are the new focus on preventative medicine and the desire for personalised medicine.

He emphasised that a programme for development and growth of the industry must be carefully formulated, adding that training and technical support are required for potential growers and manufacturers within the industry. He said that critical to the achievement of these objectives is the involvement of stakeholders, including youth, women, traditional herbalists, farmers and entrepreneurs.

In this vein, he said the engagement of the Jamaica 4-H Clubs is strategic in the government’s efforts to incorporate a wide cross section of individuals in the process.

“Already, the clubs’ ‘Youth in Agriculture’ programme and initiatives to enhance the utilization of new and appropriate technology in agriculture are showing very encouraging results and bodes well for the country’s growth agenda. We believe that we must engage our youth, if we are serious about development and we are indeed serious about development,” the minister said.

Paulwell noted that the MoU is one of the most profound engagements that have been undertaken to date, “and while we cannot discount its potential for wealth creation, we must focus more on its transformational value.”

Meanwhile, chairman, board of directors, Jamaica 4-H Clubs, Senator Norman Grant, said the partnership is a “game-changer” and signals a new era of nutraceuticals within the country.

He said the growing of nutraceutical plants will be introduced in the Club’s training and development programme in its 13 centres across the island, using both green house technology and open field agricultural methods.

“We will also be introducing this programme in our schools …and church clubs. Presently, we have a total of 456 school gardens and we are aiming that over the next three years, we will have school gardens in every single public school in Jamaica, and that now numbers 1,200,” he said

For his part, director general, NCST, Professor Errol Morrison, said the partnership is a win for all who will be involved in the process.