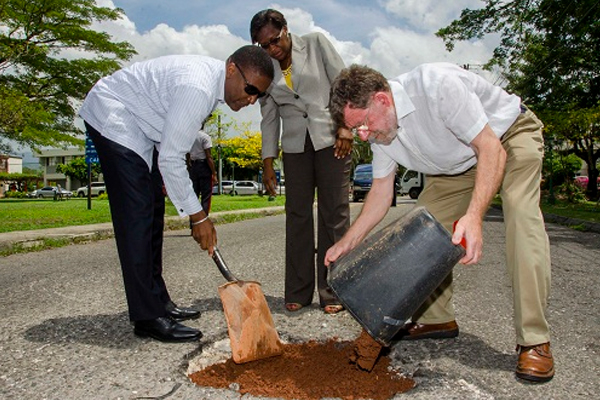 KINGSTON, Jamaica — A $7 million investment by Government in a new locally produced, low-cost concrete mix is expected to save the country millions in road repair costs, improve road safety and make the problem of potholes a thing of the past.

Made from local aggregate and waste material from bauxite processing, the product was developed by the International Centre for Environmental and Nuclear Sciences (ICENS) under the New Material Road Repair (NEWMAT-1) Project.

It has been created for application as a semi-dry concrete mix for filling potholes on parochial roads. When applied to roads, it is expected to remain in position much longer than current materials.

At the official launch on Friday (August 29) at ICENS, on the University of the West Indies (UWI) Mona campus, Minister of Science, Technology, Energy and Mining, Hon. Phillip Paulwell, said this initiative is vital in reducing the input cost of road repairs, pointing out that imported fuel used to produce cement is a drain on the economy.

“A new low-cost alternative for low strength applications should therefore make it possible to carry out far more projects, create jobs, and have safer roads, especially in our rural communities,” he said.

The Minister said he is particularly pleased that red mud, which is the waste produced from bauxite processing, is being utilised in the project.

“This is an opportunity for us to use that raw material that is in great abundance and that can be used for this project,” he noted.

The Minister further noted that the initiative represents a Jamaican innovation, noting that the intellectual property involved in the project is owned by the Ministry.

“We are going to ensure that it is properly patented so that the full value can be shared with the rest of the world,” he stated.

He said that the new product should serve to generate interest and increase support for ICENS, in keeping with its efforts to modernise, expand and contribute in more practical ways to national development.

The product was formulated during a four-week intensive programme starting with 65 mixes made in plastic cups, which were inspected for setting time, estimated strength and stability in water.

Outgoing Director General of ICENS, Dr Richard Annells, who conceptualised the project some three years ago, said the goal of the initiative was to develop a product that could fill potholes cheaply, quickly and efficiently.

He explained that the material is made with graded stone and sand aggregate available commercially, with some cementitious material added.

Pointing to benefits of using semi-dry cement for potholes, Dr Annells said it lasts a lot longer than marl “and if it is roller compacted, it can take traffic loading after about 24 hours”.

He noted that a wetter mix can be produced, which can be used to “fill service trenches such as water pipe trenches. It makes a good repair, which will harden quite quickly.”

The Director General said there is great potential in Jamaica for the use of this novel, low cost concrete mix in road repair, as the country has abundant supplies of replacement minerals.

He further pointed out that reducing the volumes of impounded red mud is very beneficial, especially to communities near the bauxite plant; and pre-blending the cementitious powder could provide jobs in small businesses.

Dr Annells said the plan going forward, is to make a low strength mix, which will not be too sensitive to variations in the raw materials.

“The idea is to have a bagged product, which people can just add water to in the correct proportions,” he said, adding that one of the aadvantages of pre-blended powder is that it is simple to use, with no need for high energy mixing. In addition, it will only require a small capital investment.

The project was made possible through collaboration with UWI, Bureau of Standards Jamaica, Mines and Geology Division, Windalco, Carib Cement, Dovecot Memorial Park, and the Montserrat Volcano Observatory.

ICENS involves multi-disciplinary research laboratories founded in 1984 and covers a diverse range of the geochemical, environmental and nuclear sciences. It carries out research aimed at protecting the nation’s people, food, the environment, and land.