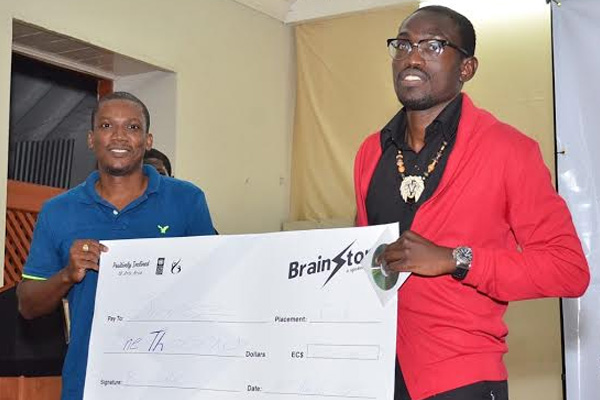 Galloway was among ten persons, who creatively expressed their opinions on crime, the impact it has on St. Kitts and Nevis and ways to address it. An engaged crowd witnessed the event held at the Old Girls School on Victoria Road.

“It was very inspiring,” stressed audience member Adolphus Jones. “I liked the diversity in terms of the talent and performances.” Another member of the audience agreed. “I really enjoyed the performances,” Jamila Morton enthused. “Poetry is a way of expressing your feelings so I think this was an excellent way for persons to portray their thoughts.”

She also credited the organizers for selecting the topic of crime describing it as very timely. Both Jones and Morton encouraged others to put pen to paper in writing about their personal feelings on matters they face in life, noting that it helps to relieve stress and provides some perspective on issues faced. Morton is taking her advice.

“It opened up my mind to try it one day,” she revealed, adding that she will consider competing in the next Brainstorm competition.

The winning piece of the inaugural contest generated much food for thought. “Try to Understand” keyed in on experiences that lead people to crime and highlighted that they are not easily understood unless persons walked in the shoes of those that lived them.

“I Screamed” by Dana Williams and “Imagine Losing the One You Loved” by Alistair Phipps finished second and third, respectively. Team Challenge Winner Jahnel Nisbett was also recognized at the finals.

“Brainstorm” is part of a larger Community Challenge Project implemented by Positively Inclined in collaboration with Arts Arise. It falls under the Social Innovation for Change Project funded by the United Nations Development Programme (UNDP).

The Socio4Change initiative was co-developed by the Department of Youth in St. Kitts and as such is being piloted locally. Several projects are expected to be launched by other groups in the coming weeks.

These include Project Teen View (Project TV), which aims to engage young people in the development of a short film and train them in media and arts; the St. Kitts-Nevis Agriculture Youth Forum will focus on placing greenhouses in every high school in the federation and provide training in agricultural practices for students and teachers; while another is aimed at engaging persons in Her Majesty’s Prison in creating positive messages to deter crime and violence.