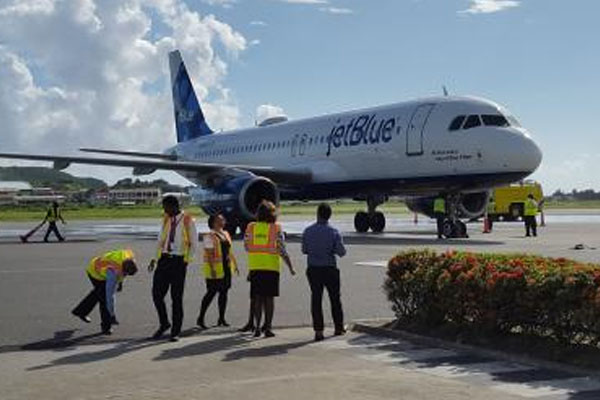 Castries, St Lucia — Saturday, November 1, marked the introduction of JetBlue’s new direct service from Boston to Saint Lucia, with this new flight operating throughout the winter of 2014/2015.

“JetBlue began flying to St Lucia from New York in October 2009 offering direct service three times a week from JFK before rapidly moving to daily service from this major US gateway” said the director of tourism Louis Lewis.

He added, “The flights proved to be so successful that JetBlue was keen to open up a new gateway to Saint Lucia, and in collaboration with the Saint Lucia Tourist Board identified the Boston market as ideal for travel to Saint Lucia. The Jetblue Boston service will also open up a number of additional gateways to Saint Lucia through the Logan airport in Boston with specific benefits to the Mid-West states”.

The continuation of daily service out of New York and this additional once a week service from Boston is a clear indication of the confidence that the JetBlue team has in the current development path of Saint Lucia’s tourism sector,” added Lewis.

JetBlue has scheduled its spacious 150-seat Airbus A320 aircraft on this route, which offers travelers all the amenities for which the airline has become known. Combined with its extremely competitive fares between the USA and St Lucia it is expected to stimulate significantly more visitors for the island during this winter period.