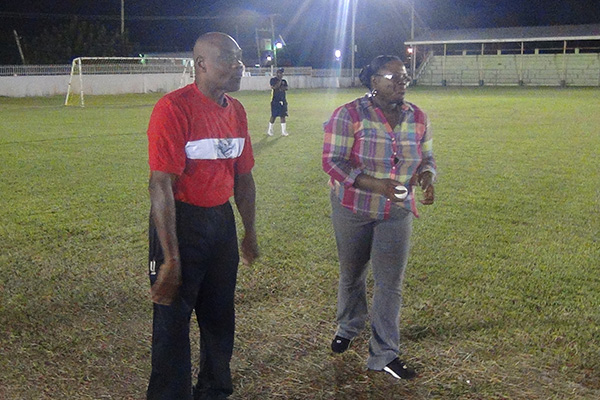 Junior Minister of Sports on Nevis, the Hon. Hazel Brandy –Williams on Thursday 28th November indicated that she shared the vision that one day, Nevis will place its first player on the West Indies female cricket team.

She was speaking at the opening ceremony of the inaugural tape ball Cricket league hosted by the Department of Sports on Nevis and sponsored by the Development Bank of St. Kitts and Nevis.

She thanked the players from the various teams that have registered for the league, noting that there were 12 male teams and 6 female teams to be involved in the tournament.

She asked the players to play competitively but more importantly to have fun while developing their skills.

She then officially declared the league open.

Prior to the Minister, Dr. Telbert Glasgow, Director at the Development Bank of St. Kitts and Nevis, delivered brief remarks.  He noted that although the request for sponsorship was received very late in the year, the board of directors decided to assist as the Bank has always gone the extra mile in giving back to the community in various ways, including sports.

He pointed to assistance given to former West Indies middle order batsman Keith Arthurton and in more recent times, to Akeem Fox who is currently plying his trade in the English league.

He pledged the Bank’s continued support to community development and wished the tournament every success.

Also delivering brief remarks was the Ag. Director of Sports, Mr. Jamir Claxton who gave an overview as to how the tournament was conceived and thanked the planning committee for the tremendous work thus far.

The ceremony was chaired by Curtis Morton, the Communications Officer within the Ministry of Social Development

Immediately after the opening ceremony, the crowd was treated to a much anticipated moment when Junior Minister Mrs. Hazel Brandy-Williams bowled the first ball to Minister of Sports, Hon. Mark Brantley.  The first ball was delivered down the leg side and was deemed a wide and her second attempt definitely had Minister Brantley in a bit of a tangle but he managed to pull it towards the fielder at square leg.

The symbolic gesture certainly got the tournament off on a high note.