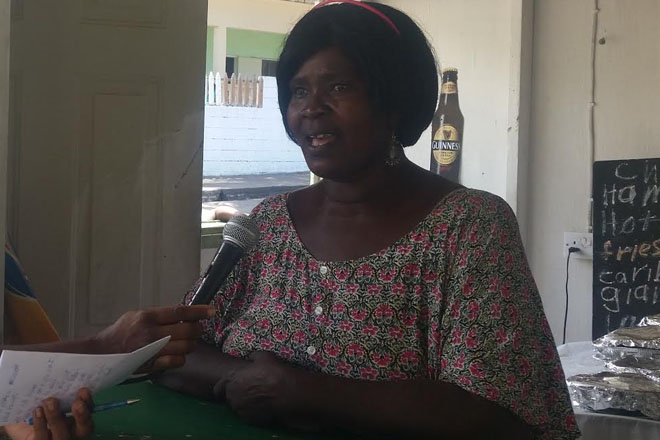 Basseterre, St. Kitts (SKNIS) — Thanks to the results of a recent survey, residents and visitors alike, will soon have access to more information about the Kalinago people, formerly known as Caribs, who once inhabited St. Kitts and Nevis.

Conducted April 15, 2015, the “Bloody Point” Kalinago Heritage Survey, indicated that 90 percent of the taxi and tour operators interviewed, said that more information about the early inhabitants would enhance their business operations. These results were provided by the Research and Documentation Unit (RDU) of the St. Kitts Department of Culture, and were gathered from a pool of 100 taxi and tour operators who were surveyed at the Bloody Point heritage site, Challengers.

The Bloody Point Heritage Site had been given that name because in 1626 the Kalinago, who were early inhabitants of St. Kitts, thinking that the British and French settlers were encroaching on their land, mounted an attack with Kalinago from nearby islands. The British and French settlers overpowered and killed many of them in the upper part of the site in question, which was a flowing river at the time. The river was said to have run with the blood of the Kalinago for several days.

Survey results also drew out the fact that taxi and tour operators felt that there was need for better parking at the Bloody Point stop. Ninety-four percent said that if a parking area was identified they would stop. In terms of their feelings about stopping at the Bloody Point site in general, 67 percent said outright there was nowhere to park, 37 percent thought the available space to stop was dangerous and 46 percent said they would not stop because of lack of information.

Eighty percent of the taxi and tour operators did note that presently they do stop at Bloody Point. Presently visitors have to remain on the bus because the available parking space is on the verge of a ghaut, in the face of incoming traffic. According to the same survey, taxi and tour operators were carrying a total of 1,062 passengers, who ranged from age from 20 to 75, on the day of the survey.

The survey also revealed that the majority of taxi and tour operators would make Bloody Point Challengers a routine stop if a centre about the Kalinago was opened. Specifically 73 percent were in favour of this.

The execution of the survey falls under the RDU’s St. Kitts-Nevis Creative and Cultural Industry (CCI) Development – Out Reach Programme. The data collected will be used to inform future development of the area. RDU is therefore working with Lucinda Phillip owner of a shop next to Bloody Point who has the desire to develop “Kalinago Karbay” Bloody Point Heritage Centre, as a means of making a livelihood and preserving the Kalinago legacy. Karbay is a Kalinago word meaning meeting place.

The St. Kitts Department of Culture is also working with Dr. Corinne Hoffman who is interested in assisting Ms. Phillip with the development of the centre. Dr. Hoffman has been conducting archaeological research in St. Kitts as the principal investigator on the NEXUS 1462 Project #1 Transformations of Indigenous Caribbean Culture and Societies across the Historical Divide. Additional information can be obtained at http://nexus1492.eu/ .