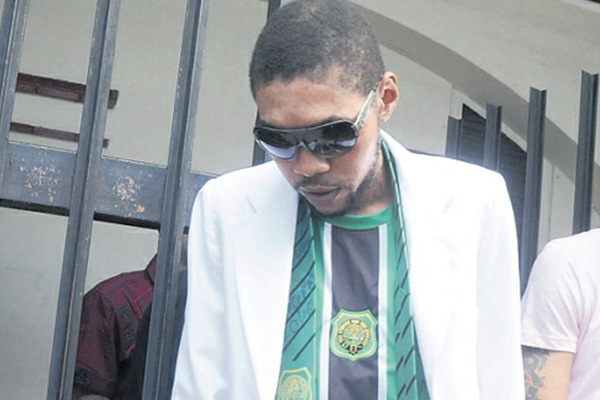 (CMC)– CLAD in a white suit, with his alma mater Calabar High School jersey and tie, Vybz Kartel was sentenced to life imprisonment for his role in the August 2011 murder of Clive ‘Lizard’ Campbell in the Supreme Court in downtown Kingston on Thursday.

Despite the possibilty of being locked away for the rest of his life, Kartel apparently paid homage to his school’s victory in last weekend’s Grace Kennedy Boys’ and Girls’ Athletic Championships at the National Stadium.

“I suspect he was paying tribute, but I don’t know for sure,” said Christian Tavares-Finson, who along with his father Tom, comprise the entertainer’s legal team.

“Once he’s dressed properly, it’s a matter for him. We don’t interfere with that.”

Calabar recorded its third consecutive victory at the annual athletic championships with 305 points. Kartel attended the school up to fourth form before leaving prematurely.

Tavares-Finson said he would visit the entertainer today.

“The appeal process has already started. He just has to fill out some papers which I suspect I should get from him when I see him,” he said.