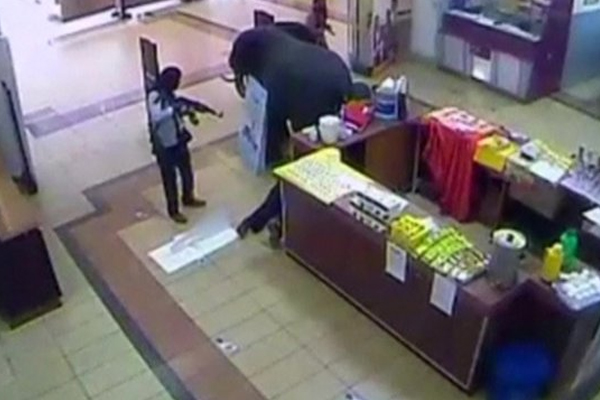 (BBC) Two charred bodies pulled from Kenya’s Westgate shopping centre on Thursday are “highly likely” to be two of the attackers, an MP has told the BBC.

Ndung’u Gethenji, chairman of the committee investigating the attack, said AK47 rifles used by the militants were found next to the bodies.

The authorities will now conduct forensic tests on the bodies.

The attack sparked a four-day siege in which large parts of the shopping centre were destroyed.

The Kenyan authorities have released the names, or nicknames, of four suspects in the attack, but have given few other details.

Mr Gethenji said the bodies recovered on Thursday were likely to be militants because the army does not use AK47s.

He said another body recovered from the rubble was likely to be a soldier.

It is still not clear whether some of the attackers might have escaped, or even how many attackers there were.

Officials initially said 10 to 15 gunmen were involved, but CCTV footage appears to show only four militants.

The BBC’s Newsnight programme has revealed that one of the suspected attackers is a 23-year-old Somalia-born Norwegian national, Hassan Abdi Dhuhulow.

His family fled to Norway in the 1990s, but he returned to Somalia in 2009 and allegedly joined the Somali militant group.

Sources in al-Shabab have told the BBC Somali Service that Dhuhulow attended a training camp in El Bur in central Somalia, one of the militants’ main bases.

The sources said Dhuhulow took part in many al-Shabab operations in Mogadishu and Kismayo and was well-known in jihadist circles.

Journalist Zubayr Roble in Oslo told the BBC that Dhuhulow frequented the Towfiq Mosque in the Norwegian capital.

Mr Roble said Somalis at the mosque for Friday prayers were in shock about the revelations and anxious over the possible implications the case could have for the Somali community in Norway.

Martin Bernsen, an officer in Norway’s Security Service, told the BBC’s World At One programme that Norwegian authorities had opened an investigation into the involvement of a Norwegian citizen in the attack “about one week ago”.

“We are trying to find out his role and what his connections are. We don’t know if he alive or if he is dead.”

When asked if the authorities had previously been aware of any previous similar activity among Somalis in Norway, Mr Bernsen said; “It’s not the Somalis we’re worried about, it’s the criminal element.

“We are aware that there are some activities. We have challenges in Norway regarding both al-Shabab and al-Qaeda. Al-Shabab was first known in Norway in 2007 when we investigated money transfer to al-Shabab”.

Mr Bernsen said Norwegian authorities were also concerned about people travelling to “conflict areas”, including Syria and Somalia, particularly in the past year.