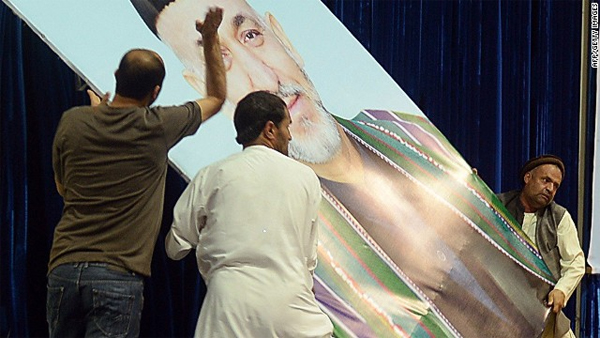 Kerry in Afghanistan to talk over election outcome, fraud claims

(CNN) — Secretary of State John Kerry made an unannounced visit to Afghanistan on Thursday where he plans to encourage a resolution to the presidential election that the United States insists must include a thorough review of “reasonable allegations” of fraud.

Kerry plans to meet in Kabul with presidential candidates Abdullah Abdullah and Ashraf Ghani as well as the man one of them will succeed,President Hamid Karzai, to discuss the political transition amid uncertainty over the vote earlier this month.

“While the United States does not support an individual candidate, we do support a credible, transparent and inclusive process that affirms the Afghan people’s commitment to democracy, and that produces a president who can bring Afghanistan together and govern effectively,” the State Department said in a statement detailing Kerry’s surprise visit.

About 8 million votes were cast in June 14 balloting and provisional results showed Ghani ahead with roughly 56% support to 43% for Abdullah, according to Afghanistan’s Independent Elections Commission. Final results will be announced July 22.

Abdullah alleged massive fraud in an interview with CNN this week, while Ghani has said the results were “legitimate and credible.”

The Obama administration is looking for a credible outcome involving one candidate or the other, and U.N. officials say sorting out the situation could take a couple of weeks. The inauguration is set for the first week of August.

The United States is withdrawing most of its troops by year’s end, reducing the primary leverage it has had in Afghanistan. But it still supports the country with billions in foreign aid.

Although once an ally of Karzai, Abdullah has in recent years become an opponent and vocal critic of the Taliban. Ghani, also a former adviser to Karzai and finance minister, was once a U.S. citizen, but gave up his passport to run for president five years ago.