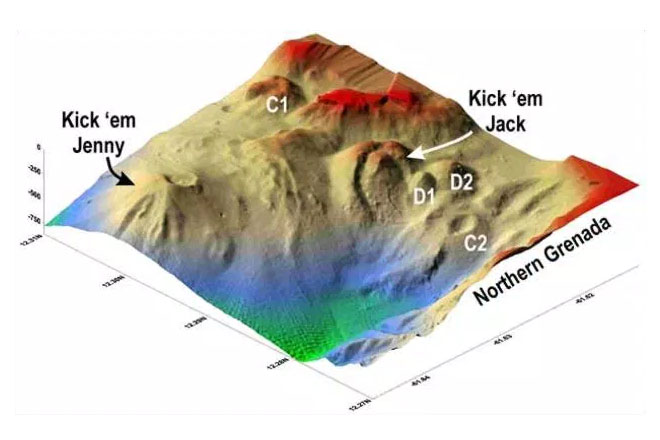 St George’s, Grenada — Early Thursday morning, a strong continuous signal was observed on instruments monitoring the Kick ‘em Jenny submarine volcano 10 km (6 miles) off the coast of Grenada in the Caribbean Sea. The alert level has been elevated to Orange in response to the increased activity.

According to the University of the West Indies Seismic Research Centre (UWI-SRC), signs of elevated seismicity (earthquakes) began on July 11 and continue to present. For the period since the July 11 a total of more than 200 micro and small earthquakes, of varying magnitudes, have been recorded, with the largest, prior to the strong signal, less than magnitude 3.0.

There have also been observations from divers of degassing occurring off the west coast of Grenada in the Moliniere Sculpture Park area. This activity is being closely monitored by the UWI-SRC.

The Orange alert level denotes a highly elevated level of seismic and/or fumarolic activity or other unusual activity. Eruption may begin with less than 24 hours notice.

All regional governments have been alerted through disaster coordinators and Venezuelan diplomatic missions. The summit area is under continuous visual surveillance.

Vulnerable communities have been advised of evacuation routes and transport put on standby. Local radio stations in Grenada, St Vincent, Barbados and Trinidad have been placed on alert. The public should listen to local radio continuously for updates and visits the Seismic Research Unit website if possible. All shipping should stay outside the first exclusion zone (1.5 km from the summit). Non-essential shipping (pleasure craft, etc.) should stay 5 km clear of the summit (second exclusion zone).

Kick ’em Jenny is of great concern to local governments. Past eruptions during the last century (1939, 1965) resulted in observed deep water tsunamis, with the one in 1939 being measured at 1m (3ft) high.

However, at a briefing for disaster management officials in Grenada on Thursday afternoon, Lloyd Lynch, a researcher at the Trinidad-based Seismic Research Centre, noted that the undersea volcano remains well below the surface, which cancels out any threat of a major tsunami.

He told an emergency meeting of the National Emergency Advisory Committee that more minor eruptions can be expected before the system goes back to sleep.

Currently, the volcano is most dangerous for ships and boats, since the gases released by Kick ‘em Jenny can lower the density of the water, causing them to sink even if it is not erupting.