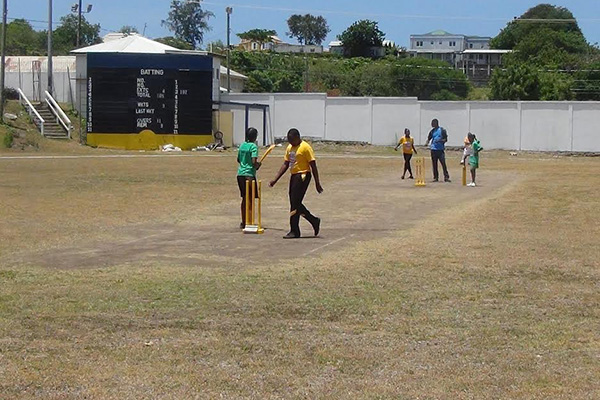 It was the culminating point for the Kiddies Cricket program on Nevis which is coordinated by the Bank of Nova Scotia and the West Indies Cricket Board.

The annual Kiddies cricket festival was held at the ET Willet Park on Monday 23rd June.

According to the Development Officer in the Leeward Islands, Junie Mitchum, even though the program runs throughout the year, there is one particular day in the year, when all of the children and their coaches are brought to one venue and an assessment of the program is done as the children are closely monitored to review what they would have learnt.

The children who represented most of the Primary Schools from across the island, then engaged in a series of matches.  These matches were of ten overs aside duration and each team started scoring with a bonus of 100 runs.

Each player had an opportunity to bowl one over, while the batters batted in pairs and each batter was allowed to bat one over.  There was a fine mixture of boys and girls on show, on the day.

At the end of the day’s activities, a brief closing ceremony was held and the following awards were made: