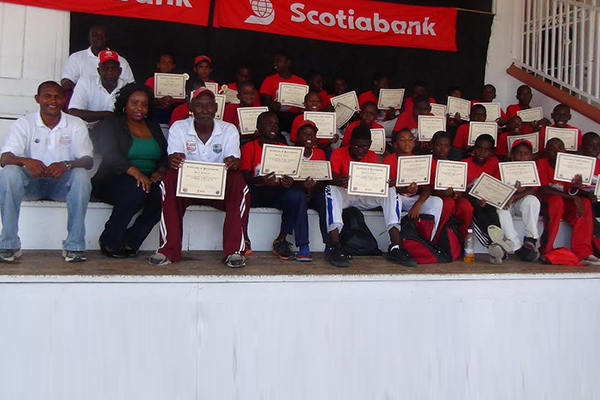 The Kiddies cricket coaching session on Nevis which is coordinated by the WICB and Scotia Bank, concluded on Friday 1st August on a high note at the ET Willet Park.

The sessions ended with semi finals and then a finals encounter between competing teams at the coaching sessions.

Leeward Islands Cricket Development Officer, Junie Mitchum indicated at the closing ceremony that he was exceptionally pleased with what was achieved during the sessions.

He noted that the young cricketers were taught the basics of the game of Cricket in batting, bowling, ground fielding and catching. He was impressed by the way they had progressed during the one week of coaching.

He was ably assisted by local coaches who included: Carl Tuckett; Derrick Parry and Livingstone Lawrence.

He also thanked the Bank of Nova Scotia for its vision and foresight.

Local Branch manager of the Bank, Ms Ebony Harp noted that there was evidence of enthusiasm permeating from the players.  She told the young players that she is hoping that the lessons learnt during the sessions will be used throughout their lives.

She also wished them every success and opined that some of them may well make it to the highest levels of West Indies cricket.

Ms Harp also presented the certificates to the players.

All of the players also received a bag pack and a lunch kit compliments of Scotia Bank.

The vote of thanks was delivered by Patrice Nisbett Jr.