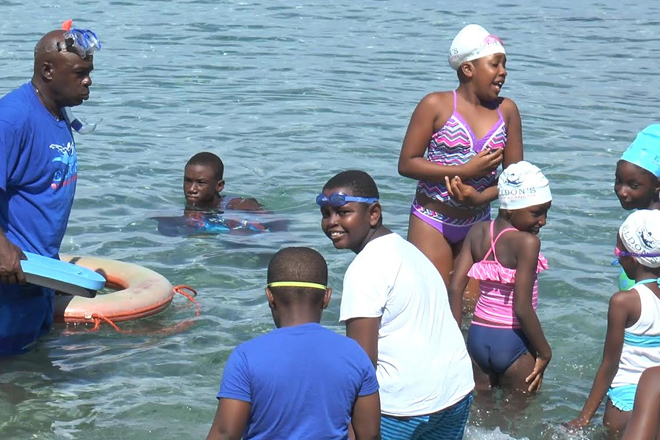 (ZIZ News) — Dozens of students were seen splashing and enjoying the island’s sun, sand and sea as they participated in Eldon’s Swim Academy Summer Programme held near the Timothy Beach Resort on Tuesday.

Founder And Director of the Eldon Swim Academy, Eldon Thomas spoke with ZIZ and explained the purpose of the camp.

“The main purpose of having the Swim Camp is to get parents interested in having their children learn to swim. This is an island and when someone drowns it is a tragedy. I don’t think anyone should drown when they come from an island because all around us we have the ocean and so people can learn to swim. Where there is lack of interest, we’re are hoping to boost the interest not only for parents but for our nation at large where children can actually learn to swim not just at the camp but also at the Swim Academy”, he said.

He explained that the lessons were not just for beginners.

Thomas said the academy’s swim classes began in February but this is the first time they have hosted a camp.

Thomas also said he intends to make the Summer Programme an annual event.

“We are hoping to make this an annual programme so that it would get bigger and better every year with more children as well. We have the Coast Guard team with us and I want to thank them because they are here and I hope to get them more involved. We are also hoping to create a Lifeguard Foundation from this. A foundation where we can get strong swimmers more interested in assisting persons on the beach, at pool areas etc and eventually we would be able to eliminate the issue where people drown here in St. Kitts.

Student at the Swim Camp Summer Programme, Quebielah Thomas said she has learnt a number of swimming techniques thus far.

“I have been learning how to do the back stroke, the breast stroke and the freestyle. The freestyle is my favourite part because it is breathing on the side and kicking and I love kicking”, she said.

The swim camp consists of various presentations including CPR Training Lessons from the Red Cross, Water Safety tips from The Coast Guard, Fire Safety lessons from the Fire Services Department and Crime Prevention tips from the St. Christopher and Nevis Police Force.

Eldon’s Swim Camp Summer Programme runs from 9 am to 12:30 pm and ends on Friday August 12.