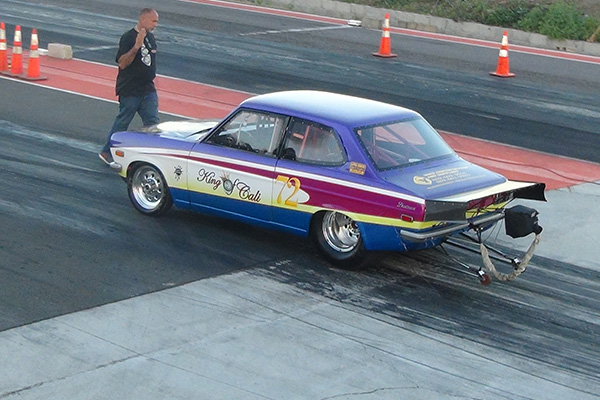 King of Calle to go Viral

Sports Page — Spokesman for the newly formed KING OF CALLE club, Huje Elliot, on Tuesday confirmed that the group has made several plans towards the further promotion of the major race car on Nevis for 2014, the KING OF CALLE.

According to Elliot, the man at the helm of the club is Owner/Manager Gavin MOON Clarke but he noted that Clarke has a full support cast which includes the Driver of the prized vehicle and other persons who ensure that the vehicle is well maintained and properly kept.

The newly formed club has made several plans which they will use to ride on the successful year of the now famed race car.

Included in those plans, will be a video shoot this coming weekend.

Elliot indicated that during the last Culturama celebrations, he released a Soca tune entitled KING OF CALLE, during which he paid tribute to the feats of the race car. That song will be used as the background music in the proposed video.

The first ‘shoot’ will take place on Saturday 27th December in Church Ground, at the home base of Gavin MOON Clarke and the KING OF CALLE.

Elliot is inviting all race fans and other interested persons to come out and witness the video shoot and even be a part of the experience.

The second ‘shoot’ will take place on Sunday 28th December at the St.James’ Raceway. Again, the general public is invited to be present.

Elliot also indicated that membership to the newly formed club is open to all interested persons.

The club will sponsor the production of the upcoming video which will be placed on YOU TUBE and other media outlets and Elliot is confident that it will make worldwide impact.

However, the club will be hosting other fund raising events which will include but will not be limited to: Cricket matches; Basketball matches; boat rides etc.

The funds raised will go towards ensuring that the ‘KING’ participates in more regional and international meets in the upcoming year and beyond. It will also ensure that club members will be able to travel along with the vehicle.

KING OF CALLE not only dominated the local Drag racing scene in 2014 but recently won a major event in Antigua.