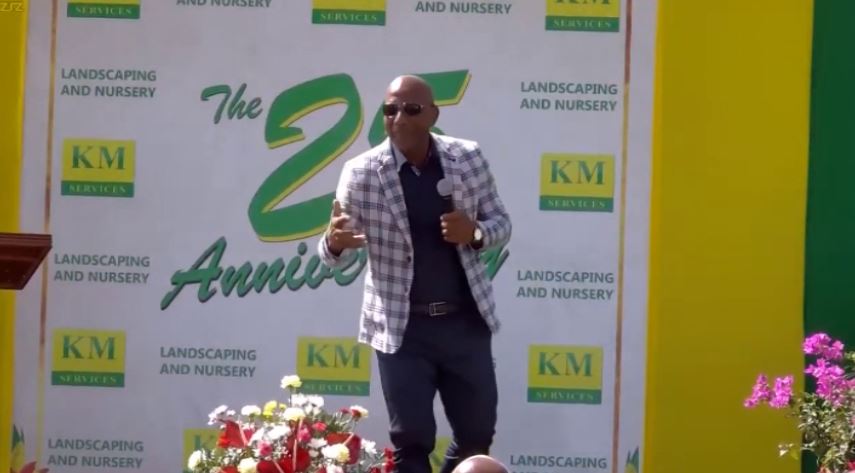 The ceremony was spent reflecting on the 25-year journey of the staff and owner of the organization, Karim Maynard which consisted of his dedication, failures, frustrations and successes.

There was also a series of remarks from persons who played a part in the journey of the company, including his advisor and the first person to do business with Mr. Maynard outside of St. Kitts, Minister of Environment, Hon. Eric Evelyn.

Minister Evelyn said that as an entrepreneur, Mr. Maynard is a role model for the youth of the federation.

“I think Karim is a fantastic role model for many of our young people because a lot of the times we believe that we cannot do things on our own and we must be working for someone else well Karim has said no, I can do things on my own, I can be my own successful businessman because it’s always well and good to be a businessman or a businesswoman but you must have what it takes to be successful.”

“It is always a good thing to come and support your local people, local businessmen, local entrepreneurs and everyone who do an honest day’s work in order to receive an honest day’s pay and also to ensure that this country that we so love continues on an upward trajectory in terms of development.”

During his remarks, Mr. Maynard reflected on his journey which led to him establishing K.M Services including the expansion into the plant nursery service.

“So I got workers and I realize that they mow the plants down many times and say it’s an accident, they will trim the plants and say it’s an accident… so I started seeking plants around the neighbourhood, friends…and I would go and purchase plants to replace the clients plants soon we realize later that the price keep going up every time I go back so I decided I’m going to start a nursery in my mother’s back yard under her coconut tree… and that’s when K.M Services nursey was born.”

After the remarks, the audience was treated to performances from a trumpeter and a dancer.