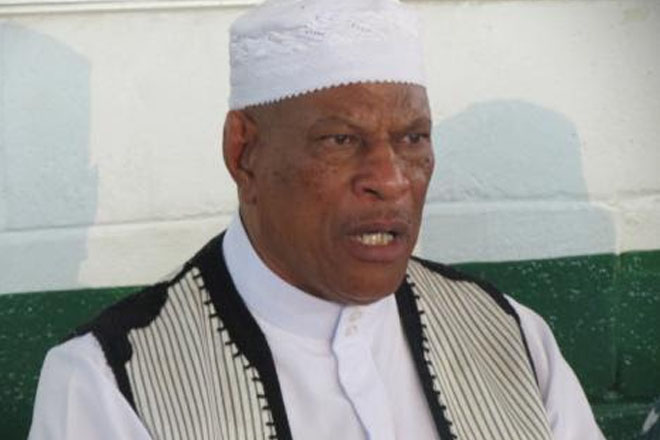 Port of Spain, Trinidad — Jamaat-al-Muslimeen leader Yasin Abu Bakr was detained by police in Trinidad on Monday morning in connection with the 2014 murder of former independent senator and prominent local attorney Dana Seetahal.

Police officers from several branches of the Trinidad and Tobago Police Service (TTPS) went to Bakr’s home to execute a search warrant for guns and ammunition, the Trinidad Guardian reported.

While nothing illegal was recovered at the property Bakr was reportedly detained in relation to several outstanding investigations being conducted by local police, including Seetahal’s murder on May 4 last year.

Seetahal, was shot dead while returning home from a night at a casino. She was ambushed by gunmen who riddled her SUV with bullets as she drove towards her apartment.

The TTPS has been repeatedly criticised for its lengthy investigation in the case and its failure to bring closure to her family over a year after her death.

Bakr (born Lennox Philip) is the leader of the Jamaat al Muslimeen, a Muslim group in Trinidad and Tobago, which had long-standing links with former Libyan leader Muammar al-Gaddafi. Under the leadership of Abu Bakr and Bilaal Abdullah, the group staged an attempted coup d’état against the government of Trinidad and Tobago in 1990.

Bakr co-organized and attempted the violent coup d’état, with the suspected aim of establishing an Islamic state in Trinidad and Tobago. The country’s then prime minister, A.N.R. Robinson and other Parliamentarians were taken hostage. The prime minister was subsequently shot and another member of parliament was killed. Twenty-four deaths were attributed to the coup attempt.

A 2014 commission of enquiry report into the 1990 attempted coup identified Abu Bakr as the unrepentant mastermind and described him as “ruthless”.

In November 2005, Bakr was arrested and charged with inciting extortion and sedition. A search of his office turned up a high-powered assault rifle, along with a hand grenade and 700 rounds of ammunition.

Seetahal served as special prosecutor in Bakr’s trial for sedition in 2012. The trial ended in a hung jury and Seetahal was again due to lead the state’s case in his eventual retrial.

In 2010, Seetahal was appointed to supervise the sale of ten of Bakr’s properties to recoup almost $32 million in damages owed to the state for the failed 1990 coup, of which Bakr was the architect.

Bakr eventually re-purchased most of the properties at the auction.