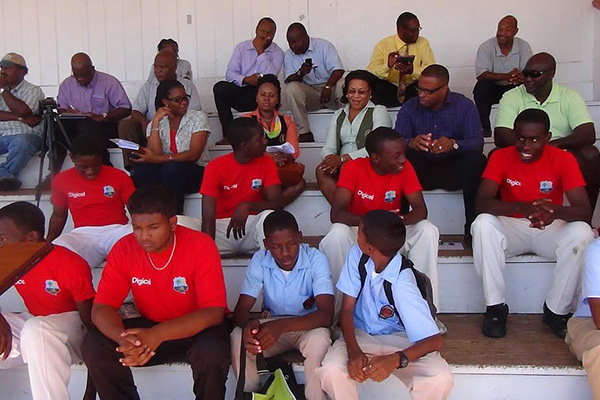 The local cricket season bowled off at the ET Willet Park on Thursday with an impressive opening ceremony.

The national anthem was beautifully rendered on pan by  Adiel Chowtipisaud and the opening prayer was delivered by Pastor Ron Daniel.

Former Nevis and LICA President Carlisle Powell spent some time on the historical development of the game of Cricket on the island and also saluted those who had achieved at the highest level.

He opined that Nevisian cricketers had to be especially talented in order to achieve so much despite the limited resources.

He had some suggestions in terms of the way forward”

Territorial Development Officer for LICA, Junie Mitcham focused on the development of the sport at the club level and outlined certain incentives put in place by the West Indies cricket board…

President of the Nevis cricket Association Keith Scarborough  was proud to announce the following sponsors for this year’s season:

The Manager of the Nevis team for 2014 is Ronald Powell; the Trainer is Masefield Nisbett and the Coach is Stuart Williams

He elaborated on the commencement of the various tournaments as follows:

The second division tournament will commence on Thursday 27th February

He also made the controversial announcement that there will be no grading of players for this year’s tournaments. ‘The current crop of players we have are not good enough to be graded,’ he stated.  This statement was much debated after the ceremony concluded.

Ms Danienne Brinn, the Marketing Officer for the St.Kitts-Nevis Development Bank assured the gathering that her renowned institution was happy to assist with the development of the youth as is the focus of the Nevis Cricket Association.

Mr. Mackay France who represented the Four Seasons Resort, received warm applause when he announced that his world renowned establishment was not only making a monetary contribution to the NCA but would also take responsibility to maintain the outfield in a proper manner and would also contribute lunches for players and officials for all Leeward islands matches to be hosted this year by the NCA.

Hon. Mark Brantley, the Minister of Sports was happy to agree with Carl Tuckett that he did represent his school along with Tuckett and Stuart Williams as a leg spinner.

He pledged the continued support of the Nevis Island Administration to the development of Cricket, as far as its limited resources would allow and thanked the sponsors who had all come on board to assist this year.

He took time out to educate the young cricketers on the many cricket related professions available nowadays. These include but are not limited to:

Umpire—as in the case of Carl Tuckett

Physio Therapist-as in the case of Virgil Browne

He urged them to play the game hard but fairly and to demonstrate sportsmanship at all times.

He then officially declared the league open.

The summarized scores from that match are as follows: