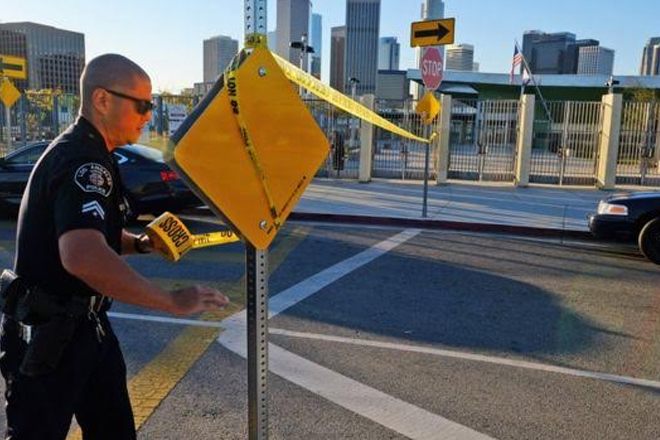 (BBC) Los Angeles schools have been closed as an unspecified threat emailed to the school district is being investigated.

The threat against the second largest school system in the US led to 640,000 pupils being told to stay away, while school buses were returned to depots.

A school district spokesman said it involved rucksacks, and they were exercising “an abundance of caution”.

New York City officials said they received the same threat that closed LA schools but concluded it was a hoax.

The city’s police commissioner, William Bratton, said an emailed threat came from overseas, purporting to be from jihadists, but was not considered credible.

But LA Police Chief Charlie Beck responded by saying it was “irresponsible” to criticise when you didn’t have the responsibility of safeguarding three-quarters of a million lives.

The Los Angeles Unified School District has more than 1,000 schools, which all still being searched.

“Earlier this morning we did receive an electronic threat that mentions the safety of our schools,” said Steven Zipperman, chief of the Los Angeles school police department.

“We have chosen to close our schools today until we can be absolutely sure that our campuses are safe.”

The email, which was sent to several school districts across the US late on Monday, is believed to have come from an IP address in Frankfurt, Germany.

The threat comes amid a heightened alert after 14 people were killed by a radicalised Muslim couple in San Bernardino, 60 miles east of Los Angeles.

“It was not to one school, two schools or three schools. It was to many schools, not specifically identified… it was to students at schools.”

When asked what was meant be “electronic” threat, he said simply that “it was a message”.

Officials were notifying parents to keep children at home or pick them up.

Lupita Vela, parent of an eight-year-old daughter who attends school in the district, told the AP news agency she was “terrified” getting the announcement, especially following the San Bernardino attacks.

She wants her daughter to feel safe at school, she said.

Another parent of a LAUSD student, Elinor McMillan, said she’s a “nervous wreck”.

In a separate incident, classes were also cancelled at San Bernardino Valley College on Tuesday due to a bomb threat made on Monday afternoon.